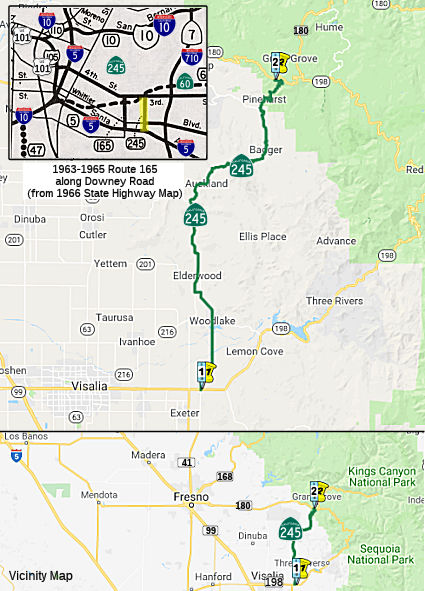 From Route 198 to Route 180 near the General Grant Grove section of Kings Canyon National Park.

In 1963, Route 245 was defined as the route from "Route 5 near Los Angeles to Route 60 at the intersection of Downey Road." This may have been a temporary routing related to construction of the downtown interchanges.

In 1972, Chapter 1216 redefined Route 245 as "Route 198 to Route 180 near the General Grant Grove section of Kings Canyon National Park." This route was created as a renumbering of former Route 69. Rumor has it that the renumbering was due to continual theft of the Route 69 signs. 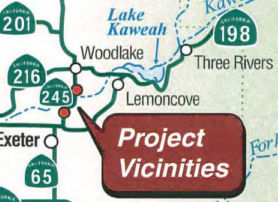 In October 2019, the CTC had on its agenda for future consideration of the following project: 06-Tul-245, PM 1.26/4.19 Route 245 in Tulare County. Replace existing bridge on Route 245 near the town of Woodlake in Tulare County. (PPNO 6787). This project is located on Route 245 near Woodlake in Tulare County. The project proposes to replace the nonstandard bridges with standard width bridges and install standard approach railing as needed at both Yokohl Creek bridge (No. 46-0011) at post mile 1.39, and at Kaweah River bridge (No. 46-0073) at post mile 4.19. This project is fully funded and is currently programmed in the 2018 State Highway Operation Protection Program (SHOPP) for an estimated $17.3 million which includes Plans, Specifications and Estimates, Construction (capital and support) and Right of Way (capital and support). Construction is estimated to begin in 2021. The scope, as described for the preferred alternative, is consistent with the project scope programmed by the California Transportation Commission (Commission) in the 2018 SHOPP.
(Source: October 2019 CTC Agenda, Agenda Item 2.2c.(1))

In January 2020, the CTC approved a technical amendment to the 2018 SHOPP regarding this project: 06-Tul-245 1.2/1.6 PPNO 6787 ProjID 0615000293 EA 0U280. Route 245 near Woodlake, at Yokohl Creek Bridge No. 46-0011 (PM 1.19/1.59); also at Kaweah River Bridge No. 46-0073 (PM 4.19/4.30). Replace bridges to upgrade to current standards, facilitate bike lane shoulders, and upgrade guard railing. The amendment included an increase to construction cost because of an increase in bridge material costs, the need for temporary trestles to facilitate pile driving, and the need to raise the bridge profile in order to meet updated Central Valley Flood Protection Board (CVFPB) requirements. Increase to construction support because more working days are required. There was a decrease in R/W capital because environmental mitigation and utility costs were lower than expected.
(Source: January 2020 CTC Agenda, Agenda Item 2.1a.(1d) Item 17) 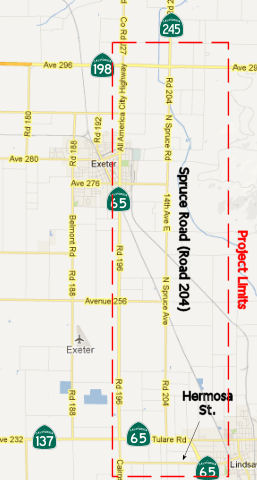 In December 2012, the CTC reviewed a draft EIR regarding improvements on Route 65 and Route 245 in Tulare County to create the Tulare Expressway. The project will realign Route 65 and construct a two-lane expressway on a four-lane right of way for 9.3 miles from Hermosa Street in Lindsay to Avenue 300 on Route 245 northeast of Exeter. There would also be about 0.5 miles of improvements on Route 245 starting at Route 198. The project is not fully funded. The project is programmed in the 2012 State Transportation Improvement Program. The total estimated cost for capital and support is $102,711,000. Construction is estimated to begin in Fiscal Year 2018-19. In addition to the no-build alternatives, there are two alternatives being considered: Build Alternative 1 would parallel the east and west side of existing Spruce Avenue depending on location; Build Alternative 2 would project the west side of existing Spruce Avenue. The project is needed to provide a continuous expressway through the corridor. Existing Route 65 does not provide direct access to Route 245 for traffic wishing to continue NB. Currently NB traffic on Route 65 must turn E at the Route 65/Route 198 intersection, enter a left turn lane, and wait for a signal. Route 65 also passes through Exeter, resulting in traffic flow interruptions with local traffic and the use of Spruce Road (Road 204) as an alternative. This has increased the accident rate.

Caltrans is exploring creating a roundabout on this route at the intersection of Route 216/Route 245 in Woodlake (~ TUL 7.054). Other potential/planned roundabout locations in the San Joaquin Valley include Route 145/Jensen near Kerman, Route 168/Auberry Road in Prather, Route 43/Route 137 in Corcoran, Route 190/Road 152 east of Tipton, Route 190/Road 284 east of Porterville, and Route 155/Browning Road in Delano. A 2007 study of 55 roundabouts in the U.S. found a 35% reduction in accidents and a 90% reduction in fatal accidents when intersections with stop signs or signals were converted to roundabouts. It costs about the same to build a roundabout as to put up traffic signals, and they need significantly less maintenance than traffic signal intersections -- about 60% to 90% less, depending on how much landscaping work is required.

The portion of Route 245 (Millwood Drive) from Avenue 364 to Avenue 398 near the town of Elderwood (~ TUL 10.47 to TUL 14.97), in the County of Tulare, is named the "Specialist Manuel Joaquin Holguin Memorial Highway". It was named in memory of United States Army Specialist Manuel Joaquin Holguin, born in 1984 in Visalia, California. Joaquin, as he was known to his family, grew up in the small foothill community of Elderwood, California, and attended public schools in Woodlake, California, graduating from Woodlake Union High School in June 2002. Joaquin was an athlete, playing soccer and baseball from the age of 5 years through high school. Living in the country, he also became knowledgeable in the use and safe handling of firearms and by the age of 12 years, he passed his hunter safety course and was proficient with a 12-gauge shotgun. In the fall of 2001, Joaquin decided to join the United States Army, following in the footsteps of his grandfather and uncles who had served in the United States Army during World War II and the Vietnam War. During his senior year of high school, Joaquin was admitted into the United States Army’s early enlistment program, officially enlisting upon graduation from high school for a three-year commitment on November 11, 2002, and was sent to Fort Benning, Georgia, for boot camp. Joaquin remained at Fort Benning, Georgia, for advanced infantry training, graduating in March 2003 with a designation as a mortarman. He also earned an award for being the highest marksman with a rifle in his platoon and would go on to continually score as an expert with a rifle and mortar. Joaquin was assigned as a gunner and driver to the 2nd Battalion, 6th Infantry Regiment, 2nd Brigade of the 1st Armored Division in Baumholder, Germany. His division left Germany for Iraq in April 2003 and was assigned to an area of southern Baghdad operating out of Camp Muleskinner, but also saw action in Karbala and Al-Kut. His division would remain in Iraq for 15 months before returning to Germany, during which time, in this his first tour of duty, Joaquin received the Combat Infantry Badge and earned the rank of Specialist. Joaquin received orders that his active duty commitment was being extended. In November 2005, his brigade was sent back to the area of southern Baghdad Iraq for a second one-year tour of duty, and Joaquin volunteered to be part of the advanced detachment whose job was to get things in order for the arrival of the remainder of the brigade. On July 15, 2006, his unit, doing mounted and foot patrols, responded to an explosion at a marketplace, set up a perimeter, and began to receive small arms fire. During the firefight, an improvised explosive device (IED) detonated, killing Joaquin and severely wounding another soldier. Joaquin died one month before his 22nd birthday and three months before his tour of duty would have been completed. Joaquin was awarded the Purple Heart and the Bronze Star Medals for his active military service in the United States Army for his actions, not only on that day, but for the entire time he spent in Iraq. Joaquin was also awarded the Army Commendation Medal with Oak Leaf Cluster, the Army Good Conduct Medal, the National Defense Service Medal, the Army Service Ribbon, the Overseas Service Ribbon, the Iraqi Campaign Medal, the Global War on Terrorism Expeditionary Medal, and the Presidential Unit Citation Award for his two tours of duty in Iraq. Named by Assembly Concurrent Resolution 135, Res. Chapter 85, on July 7, 2014.
(Image source: Iraq/Afghanistan War Heroes)