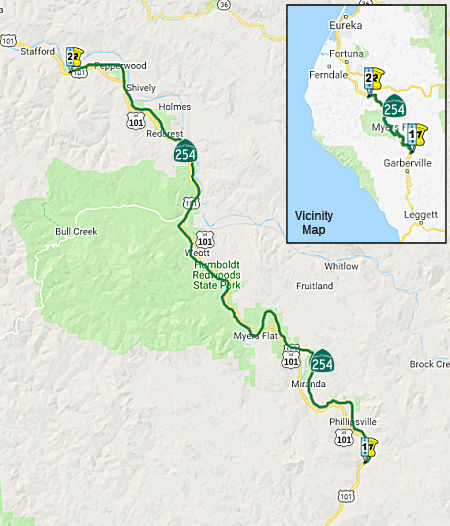 A portion of the former Redwood Highway through and connecting a number of state park units, from Route 101 near the Sylvandale interchange to Route 101 south of Stafford.

This route was added in 1963 by Chapter 890 as “the Avenue of the Giants, comprising a portion of the former Redwood Highway through and connecting a number of state parks, from Route 101 near the Sylvandale interchange to Route 101 near the Redcrest interchange.” A duplication section defining this was added by 1963 Chapter 901, but repealed by 1965 Chapter 155. Note that these chapters also added this route as LRN 296, but that definition did not take effect.

In 1968, Chapter 282 relaxed the definition: “the Avenue of the Giants, comprising a portion of the former Redwood Highway through and connecting a number of state parks, from Route 101 near the Sylvandale interchange to Route 101 one-tenth of a mile north of Jordan Creek.

In 1990, Chapter 1187 clarified the definition: “the Avenue of the Giants, comprising a portion of the former Redwood Highway through and connecting a number of state park units, from Route 101 near the Sylvandale interchange to one-tenth of a mile north of Jordan Creek south of Stafford.” This change added the portion from one-tenth mile north of Jordan Creek to Route 101 south of Stafford.

In 1992, Chapter 1243 relaxed the definition: “the Avenue of the Giants, comprising a portion of the former Redwood Highway through and connecting a number of state park units, from Route 101 near the Sylvandale interchange to Route 101 one-tenth of a mile north of Jordan Creek south of Stafford.”

This route is a former segment of US-101 that has been bypassed by freeway.

The Gribblenation Blog "California State Route 254; Avenue of the Giants and former US Route 101" provides more details on this segment. The following is condensed from that presentation:

The July 1916 California Highway Bulletin discusses the construction of 14 miles of the Redwood Highway/LRN 1 from Miranda north to Dyerville.  This segment of the Redwood Highway would in decades become part of Route 254/Avenue of the Giants.  When US 101 was designated in 1926, it was largely planned to follow the Redwood Highway south from Crescent City towards San Francisco, and US 101 appears on the 1925 Rand McNally Map of California as being routed over the Redwood Highway of Humboldt County.  The July 1931 California Highways & Public Works announced the purchase of Coastal Redwoods by the Save the Redwoods League from the Bull Creek and Dyerville Groves which were to be incorporated into Humboldt Redwoods State Park.  Humboldt Redwoods State Park had been established previously in 1921. US 101 was stable for many years, modulo storm damage. The March/April 1957 California Highways & Public Works discusses the modernization of US 101/LRN 1 in Humboldt County.  The first segment of the Redwood Freeway slated to be constructed was a segment from Englewood south to the vicinity of Dyerville.  The Redwood Freeway was planned to continue south from Dyerville to the Mendocino County Line.

In August 2016, the CTC approved for future consideration of funding a project on Route 254 in Humboldt County that will upgrade the railings on four bridges on Route 254 near Humboldt Redwoods State Park. Specifically, this project in Humboldt County will upgrade the railings on Ohman Creek Bridge (HUM 000.88), Elk Creek Bridge (HUM 010.43), Bridge Creek Bridge (HUM 010.80), and Bear Creek Bridge (HUM 043.02). The project is programmed in the 2014 State Highway Operation and Protection Program. The total programmed amount is $7,509,000 for capital and support. Construction is estimated to begin in Fiscal Year 2016-17. The scope, as described for the preferred alternative, is consistent with the project scope programmed by the Commission in the 2014 State Highway Operation and Protection Program.

In March 2021, notice was given of a draft EIR on the Fish Creek Culvert project. The Fish Creek reinforced concrete box (RCB) culvert was originally constructed in 1919. In 1929 the culvert inlet and outlet were extended and in 1981 twelve concrete ramp-style baffles were constructed to improve fish passage. This fish passage improvement effort was largely unsuccessful. After the final retrofit, the culvert provided only partial migration to adult steelhead during ideal creek flows. In 2005, the culvert was ranked as the highest priority location for fish passage barrier mitigation in the California Department of Transportation (Caltrans) District 1 Pilot Fish Passage Assessment Study (Caltrans 2005). A stream inventory conducted by CDFW during the summer of 1999 identified approximately 3.0 miles of blue line stream upstream of the confluence with the South Fork Eel River, and the culvert was noted as the only barrier. From 2006 to present, several projects were initiated to improve fish passage at Fish Creek. Most notably was a 2011-2016 multi-agency effort including Trout Unlimited, CDFW, California State Coastal Conservancy, Caltrans, and State Parks to replace the undersized RCB culvert with a larger 20-foot-wide by 10-foot-tall pre-cast concrete arch culvert constructed over a cast-in-place concrete fishway. Concerns over impacts to large Coast redwood trees due to foundation excavation and potential stream bank erosion hindered project development. The team also became concerned that upstream aggraded sediment would transport and fill the constructed fishway pools, reducing fish passage effectiveness and increasing the potential for large woody debris which could plug the arch culvert. Ultimately, the arch culvert fish passage project was abandoned due to lack of agency support.
(Source: FISH CREEK FISH PASSAGE PROJECT INITIAL STUDY with Proposed Negative Declaration and Proposed Section 4(f) Evaluation, February 2021)

The project proposes to remove the existing undersized reinforced concrete box (RCB) culvert and replace it with a 32-foot-wide by 42-foot-long bridge to remediate the fish passage barrier. The project would include retaining wall installation, construction of a 42-foot-long bridge that fully spans Fish Creek, and stream channel restoration. The project location is the Fish Creek stream crossing on Route 254 (Avenue of the Giants) at post mile 4.18, located near Miranda in Humboldt County, California. Fish Creek bridge construction preparation would begin with construction excavations beginning in the early summer and extending through the summer and fall season. Approximately 0.29 mile of Route 254 at Fish Creek would be temporarily closed during construction. Motorists and bicyclists would be detoured using US 101 between the Miranda and Phillipsville exits. Access to the parking areas in the project vicinity would be closed to the public during construction. However, access to the Avenue of the Giants would be accessible to the public on either side of the closure. No access roads are proposed as the work can occur from the roadway and creek channel. Staging would occur on the roadway, existing turnouts and parking areas in the project area. Large materials that cannot be staged may include pre-cast forms, slabs, and backfill material that would be trucked to the work area as needed. Due to their proximity to the excavation of the existing RCB, three trees would need to be removed prior to construction. The proposed bridge would be a single span structure approximately 32-feet-wide and 42-feet-long and would be placed on the proposed secant wall. The superstructure would be a 15-inch-deep, precast, pre-stressed voided slab with a 6-inch-thick cast-in-place concrete composite deck. The proposed bridge would have two 11-foot lanes, a 4-foot southbound shoulder, and 2-foot northbound shoulder. The railing would be a California ST-85 bridge railing. The ST-85 bridge rail is a 42-inch tall railing (36-inches for vehicular railing and 6-inches for bicycle railing), which consists of concrete posts spaced at 10-foot centers and a single horizontal 12-inch deep concrete beam. The bridge rail would include architectural treatment on the face (front, top, and back) of the rail that mimics wood and/or rock. Reusable crash cushions would be installed at the ends of the bridge.
(Source: FISH CREEK FISH PASSAGE PROJECT INITIAL STUDY with Proposed Negative Declaration and Proposed Section 4(f) Evaluation, February 2021)

More detail was in a withdrawn item in the June 2021 CTC minutes. The Fish Creek Fish Passage Project: will replace an existing culvert with a bridge at Fish Creek on Route 254 in Humboldt County. (01-Hum-254, PM 4.18, PPNO 2403) This project is located on Route 254 at post mile 4.18, in Humboldt County. The Department proposes to remove the undersized reinforced concrete box and replace it with a 32-foot wide by 42-foot long bridge to remediate the fish passage barrier. The project would include installation of retaining wall, construction of a 42-foot bridge to span over Fish Creek, and restoration of stream channel. This project is currently programmed in the 2020 State Highway Operation and Protection Program (SHOPP) for a total of $17,299,000, which includes Construction (capital and support) and Right of Way (support). Construction is estimated to begin in 2022. The scope, as described for the preferred alternative, is consistent with the project scope as programmed by the Commission in the 2020 SHOPP.
(Source: June 2021 CTC Agenda, Agenda Item 2.2c.(1))

In July 2010, the CTC vacated right of way in the county of Humboldt along Route 254 at 0.15 miles north of Trouble Lane near Miranda (~ HUM 6.585), consisting of highway right of way no longer needed for State highway purposes. The County of Humboldt was given a 90-day notice of intent to vacate, without protesting such action.

In August 2011, the CTC approved $729,000 in SHOPP funding to repair slipout and failed drainage facilities damaged by heavy rainfall near Redcrest, 1.7 miles north of South Fork Eel River Bridge and at 2.9 miles south of Bear Creek Bridge (~ HUM 022.34). They also approved $1,662,000 to reconstruct embankment, construct Tie- Back Slope Protection wall, repair drainage system and dewater and fill the voids in the roadway prism at 1 location to repair washed out embankment cause by heavy rain near Miranda, 0.6 mile south of Post Office. 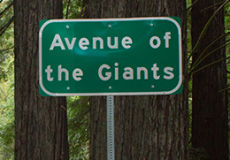 This segment is named the "Avenue of the Giants". It was named by Assembly Concurrent Resolution 10 in 1960. The highway is named for the Coast Redwoods that overshadow the road and surround the area. The road winds alongside the scenic Eel River, and connects several small towns such as Phillipsville, Miranda, Myers Flat, Burlington, Weott, Englewood, Redcrest and Pepperwood. According to the Save the Redwoods League, "On August 27, 1960, Governor Edmund G. “Pat” Brown stood beside some of the tallest trees in the world. His mission: to dedicate the “Avenue of the Giants Parkway.” The 32-mile-long road was not new—it had been around since the days when stagecoaches wended their way through these spectacular redwoods 200 miles north of San Francisco. What was new was a nearby high-speed highway, which made it possible for the old road to become “a serene drive,” Brown said proudly, “where kids and families can cross the road at will, where traffic moves at a far slower pace than on the bypass which is just a few hundred feet away.”" The road started in 1917, when Save the Redwoods League founders John C. Merriam, Madison Grant, and Henry Fairfield Osborn visit the site of what is now Humboldt Redwoods State Park. In 1918, the League was founded; by 1920, with funds from private donors, including Congressman William Kent and National Park Service Director Stephen Mather, the League acquires the first redwood groves along what is now the Avenue of the Giants Parkway. In 1921, the League and other civic groups convince the state legislature to appropriate “$300,000 to establish “Humboldt State Redwood Park" From 1926 on, the League and the state slowly acquired more lands for the park, thanks to many donors and hard work."
(Image source: The Bill Beaver Project)

This route was designated as a "Blue Star Memorial Highway" by Assembly Concurrent Resolution 61, Chapter 61 in 1996.

This was all signed as part of proposed Route 93.