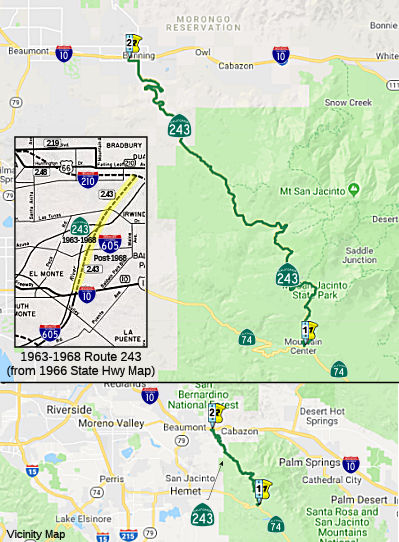 From Route 74 near Mountain Center to Route 10 near Banning.

Construction of the Banning-Idyllwild Panoramic Highway began during 1904 and was completed as an oiled highway by September 1910. Banning-Idyllwild Highway would become part of the National Forest Highway System in 1927. The Idyllwild-Hemet portion of the Banning-Idyllwild Panoramic Highway was repurposed as part of the Pines to Palms Highway, and was designated as such in the 1930s. Around 196, the route was designated Riverside County Sign Route R1 before being becoming Route 243 during 1970.
(Source: Gribblenation Blog (Tom Fearer), "California State Route 243", May 2022)

The post-1970 incarnation of Route 243 existed in 1963, but was not part of the state highway system. It was Banning-Idyllwild Road. 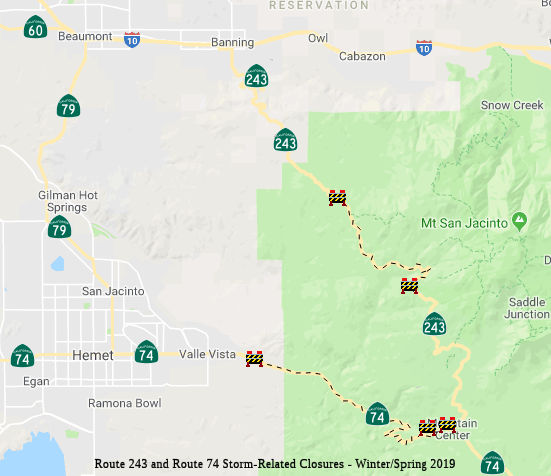 In December 2018, it was reported that Caltrans was closing a three-tenths-mile section of Route 243, about one mile northwest of picturesque Lake Fulmor (~ RIV 15.5), to replace an aging drain pipe under the road. With waves of storms sweeping across Southern California, there is concern the pipe may not be able to handle runoff and that water could spill over the highway and damage it.
(Source: Press Enterprise, 12/6/2018)

In February 2019, it was reported that an emergency contract for $8 million was awarded to Ames Construction to make the repairs to Route 243 and Route 74 near Lake Fulmor to repair roadway damage from the Winter 2019 storms. In mid-February, it was noted that there was a new collapse on Route 74, and Route 243 washed out about a mile from where a waterfall destroyed the road the day before, north of Lake Fulmor. The only way into Idyllwild is from Palm Desert along Route 74, known as the Palms to Pines Highway, Caltrans said. Even then, that path is open only to residents and business owners/employees. According to a Caltrans news release, a large hole formed underneath the road after heavy rains eroded the soil. As the rain poured down, the hole made way for a fast-flowing waterfall. The highway will be closed between I-10 Freeway and the city of Idyllwild for at least two months.
(Source: Press Enterprise, 2/15/2019; LATimes, 2/19/2019)

In March 2019, it was reported that it may be Summer 2019 before Route 74 and Route 243 completely reopen to the general public due to the extensive repair work required to restore the corridors, both of which were severely damaged during a mid-February storm event, Caltrans announced. "There are over 25 locations on Route 243 with damage, including two locations with complete road loss," according to a Caltrans statement. "Route 74 has over 40 locations that will require repairs. At this time, Caltrans is estimating at least four months before public access or reopening of both highways can take place." The worst of the damage was in the area of Lake Fulmor, between Pine Cove and Banning, where Route 243 completely collapsed and disappeared amid torrential downpours and mud flows on Feb . 14. Another segment of the two-lane, 30-mile corridor, which is the primary north-south artery through the southern half of the San Bernardino National Forest, also gave way south of Idyllwild. The entire highway is out of service between I-10 and Idyllwild, while the southern half between Mountain Center and Idyllwild is accessible to residents and business owners. A 15-mile segment of Route 74 is out of service because of the storm damage, which caused washouts and sinkholes. A portion of the highway at the Strawberry Creek crossing, roughly three miles west of Mountain Center, collapsed after it was compromised by runoff. The highway is closed from Valle Vista, just east of Hemet, to Mountain Center. As of March 28, 2019, it was reported that Ames Construction is continuing the $8 million emergency repairs to roadbeds, slopes, culverts and other items of work on both Route 74 and Route 243, working twenty-four (24) hour shifts to rebuild the routes. It was estimated that by May 2019, Caltrans will provide access to motorists on Route 74 under escort for three hours in the morning (4 a.m. to 7 a.m.) and three hours in the late evening (6 p.m. to 9 p.m.). In late April 2019, Caltrans expected to open Route 243 from Idyllwild to Lake Fulmor. The contractor will continue work to prepare for full access to motorists on Route 243 with flagging conditions in the coming months.
(Source: Palm Desert Patch, 3/12/2019; CaltransDistrict 8 Commuter Alert, 3/28/2019)

In April 2019, it was reported that a portion of Route 243 in Idyllwild was reopening on Mon 4/8/2019. Access from Idyllwild to Lake Fulmor on Route 243 will now be allowed. Additionally, the public will be able to access the Lake Fulmor Day-Use Area as well as Hall Decker Rd.
(Source: Caltrans District 8 Commuter Alert 4/8/2019)

In May 2019, it was reported that additional May rains that further damaged the already crumbling roadways shattered by heavy rains on Feb. 14. Caltrans officials said work on Route 74 was delayed at least two months and reconstruction on Route 243 has no time frame for completion. Initial estimates indicated Route 74 would reopen by Memorial Day and Route 243 perhaps by year's end.
(Source: Desert Sun, 5/30/2019)

In June 2019, it was reported that Caltrans has said there’s no projection for when the heavily damaged Route 243 will reopen, and it could stay shut until next year.
(Source: KTLA, 6/25/2019)

At the end of October 2019, it was reported that Route 243 has reopened. After the storms in February 2019, a section of a mountain slope buckled near Lake Fulmor, leaving behind a gaping hole in the roadway that serves as the main route in and out of the Idyllwild, Mountain Center and Pine Cove mountain communities. More than $8 million was allocated to fix both Route 243 and Route 74, which was also damaged during the same storm, Caltrans said. Additionally, Route 243 was repaved during the closure, with a $10 million paving project that had been previously scheduled. Caltrans has also begun a $25 million project to upgrade and restore culverts along the routes.
(Source: KTLA, 10/30/2019; CaltransDistrict 8 on Twitter) 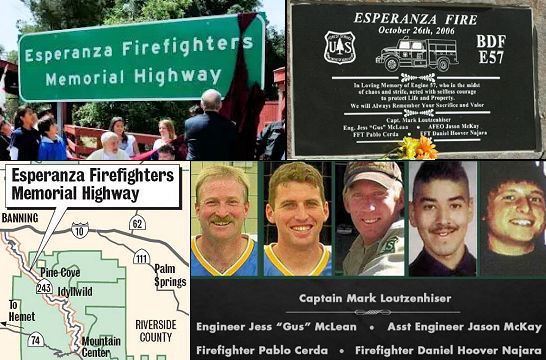 Route 243 is named the "Esperanza Firefighters Memorial Highway". The Esperanza Fire was a large, wind-driven, arson-caused wildfire that started on October 21, 2006, in Esperanza and San Gorgonio Wash in Riverside County near Cabazon, California, west of Palm Springs, California. By October 29, 2006, it had burned over 41,173 acres (61 square miles) and was 85% contained. On October 30, 2006, the fire was fully contained. Five firefighters from Forest Service Engine Company #57 were killed defending a vacant house locally known as the "Octagon" that was ultimately destroyed by the fire: While unselfishly serving their community with great honor and dedication on October 26, 2006, these five firefighters were overrun by the flames of the Esperanza Fire when the winds shifted and blew the fire towards them. Mclean and McKay died next to their fire engine without having time to enter it. Najera's body was found to the west of the structures they were trying to protect. The surviving two firefighters were transferred to Arrowhead Regional Medical Center where Loutzenhiser succumbed to his injuries shortly after arriving. Cerda died at 5:08 p.m. PST on October 31, 2006 in Arrowhead Regional Medical Center from his injuries.  The fire destroyed 34 houses and 20 outbuildings, as well as damaging the pavement of Route 243. The damage the fire caused is estimated at more than $9 million, and was the worst wildfire caused by arson since 1994. In June 2009, Raymond Lee Oyler was sentenced to death for starting the fire. Named by Assembly Concurrent Resolution (ACR) 4, Resolution Chapter 99, on 7/12/2007.
(Image source: Press Enterprise; Press Enterprise; Firefighting News; #EsperanzaFire on Twitter; Additional information: Wikipedia)