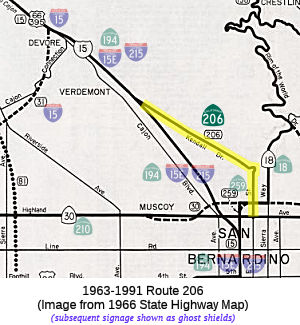 In 1963, this route was defined as "Route 30 in San Bernardino via Little Mountain to Route 15 near Verdemont."

"[LRN 69], the East Shore Highway, to [LRN 75] via Ashby Avenue, including that portion of the San Francisco-Oakland Bay Bridge approaches (on the Alameda County end) not included in [LRN 5] and [LRN 69]"

This route ran from proposed Route 61 near Emeryville to Route 24 near Lake Temescal. This is part of present-day Route 13, but the portion between I-80 (former US 40) and Route 24 was originally signed as Route 24.