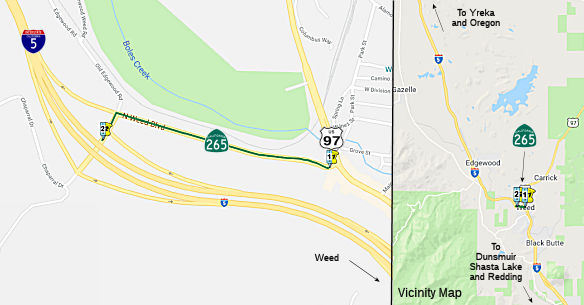 From Route 97 in Weed northwesterly to Route 5 at North Weed Interchange.

This is an original routing for Route 99. I-5 is a freeway bypass. This was part of the original LRN 3, defined in 1909.

Weed Boulevard previously was the through segment of US 99 in downtown Weed of Siskiyou County, California.  Presently segments of former US 99 on Weed Boulevard are retained in the State Highway System as US 97 and Route 265. Approximately 0.430 miles of US 97 is aligned on Weed Boulevard along with 0.435 miles of Route 265.  The remaining 0.088 miles of Route 265 are aligned as access to I-5 via Chaparral Drive.  Notably, US 97 and Route 265 on Weed Boulevard are also co-signed as Historic US 99 in addition to Business Route 5. US 99 started life as LRN 3. By 1913, the Pacific Highway was created as a major Auto Trail between San Diego and Vancouver, British Columbia.  The Pacific Highway followed LRN 3 from the Oregon State Line south into downtown Red Bluff.  By 1917, a very early routing of LRN 3 from the Weed south to Redding entered Weed via what is now Old Edgewood Road and Weed Boulevard. By 1928, US 99/LRN 3 shifted to what is now Edgewood Road north of Weed .  It is likely US 99 was never signed on Old Edgewood Road, given when actual signage in the field started.

In 1951,  a new alignment of US 99/LRN 3 opened from the City of Weed 8 miles south to the vicinity of Mount Shasta City (specifically Spring Hill).  This new alignment of US 99/LRN 3 was much straighter than the original highway (built in 1923) and eliminated numerous curves between Weed-Mount Shasta City. The Federal Aid Highway Act, enacted on June 29th, 1956, put US 99/LRN 3 through Weed on the planned route of I-5.  By late 1959, Caltrans was planning a freeway alignment of US 99/LRN 3 north of Weed 3.2 miles to the Shasta River, as the existing US 99/LRN 3 on Edgewood Road was curvy and difficult to plow in the winter.  By 1963, the freeway alignment for I-5 started to replace the old US 99 alignment (Weed was finally bypassed by 1967). On June 29th, 1965, US 99 was approved to be truncated out of California by the AASHO Executive Committee; two weeks after that on July 15, 1965, Legislative Chapter 1402 extended US 97 south through downtown Weed via Weed Boulevard to the I-5 Highway Avenue Interchange, and created Route 265 that was routed north from US 97 via Weed Boulevard to the North Weed Interchange of I-5.

In 1959, Chapter 1062 defined LRN 265 as “[LRN 60] near Malibu Beach to [LRN 4] south of San Fernando”. This was the proposed "Malibu Canyon" freeway, Route 64, that after running as the "Whitnall" Freeway across Chase, turned and ran across the Santa Monica Mountains along Malibu Canyon Road to meet Route 1.