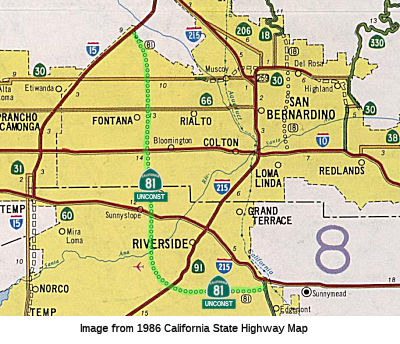 From Route 215 east of Riverside to Route 15 south of Devore.

In 1963, this route was defined to run from Route 395 east of Riverside to Route 31 south of Devore.

Route 81 was not defined as part of the initial state signage of routes in 1934. It is unclear what (if any) route was signed as Route 81 between 1934 and 1964. Based on research, it looks like the number was not in use during that time as a signed route number.

It is unsigned, and no specific routing was ever determined. This was in the planning stages, but there are no local roads meeting the definition of a traversable highway.

TEA-21 funded the reconstruction of the Route 81 (Sierra Avenue) and I-10 Interchange in Fontana. Although the legislation noted that Sierra Avenue is Route 81, it is not signed as Route 81 and doesn't appear to be formally part of the route.

This definition remained unchanged until the 1963 renumbering. This is present-day Route 197 between US 101 and US 199.