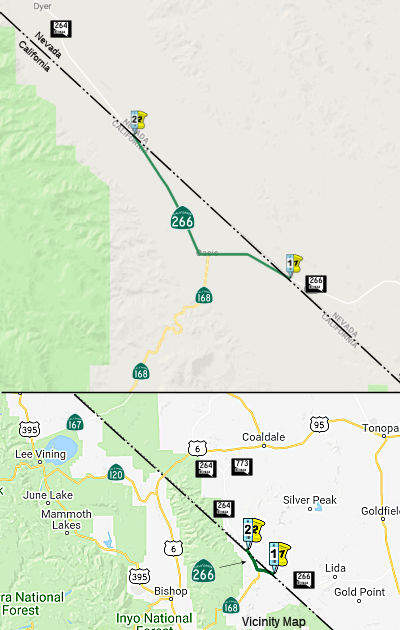 The eastern segment of Route 266 began as part of the National Roosevelt Midland Trail.  The National Roosevelt Midland Trail was a ocean-to-ocean Auto Trail established during 1913. It entered California via what is now Nevada 266 westward from Lida to Oasis in Fish Valley of Mono County.  From Oasis the Roosevelt Midland Trail continued westward over Gilbert Pass and Westgard Pass towards Owens Valley.  Westgard Pass lies in a gap between the White Mountains and Inyo Mountains at an elevation of 7,313 feet above sea level.  Westgard Pass is named after Anton L. Westgard who made a cross country journey in his Pioneer Freighter truck circa 1911.
(Source: Gribblenation Blog (Tom Fearer), “California State Route 266”, 11/1/2021)

The portion from Oasis to Southern Nevada was an extension of LRN 63, defined in 1933. LRN 63 had been first defined in 1919 as running from Big Pine to Oasis (present-day Route 168). In 1931, Chapter 82 extended LRN 63 from Oasis to California-Nevada State Line to close the 2½ mi gap over Fish Lake Valley to bring the route to the California-Nevada state line, where a Nevada state highway (pre-1976 NV 3, current NV 266) proceeds northeasterly. As such it closed the gap between the California and Nevada highway systems, and provided a complete interstate connection and corrected an obvious error in State highway designation. In 1935, the route was codified into the highway code as the route from Big Pine to the Nevada State Line via Oasis. At this time, the portion from Oasis NW to pre-1976 NV 3A, now NV 264 was a local road. 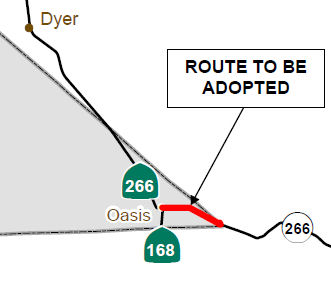 In September 2012, the CTC adopted the remaining portion of Route 266 as a State Route highway location. This route adoption addressed the lack of continuity of this route east of Oasis to the Nevada State line, owing to the fact that when the segment from Route 168 was transferred to Route 266 in 1986, there was never a formal route adoption. The proposed route adoption will extend existing Route 266 from the intersection with Route 168 to the California-Nevada state line easterly of Oasis. The route adoption allows Caltrans to construct a curve correction project within this segment and complete the route for Route 266 in Mono County.

Route 266 is a rural two-lane conventional highway located in the remote southeast corner of Mono County. It begins at the California-Nevada state line east of Oasis and connects Nevada (NV) 266 and US 95 (the northwestern access into Las Vegas) to Route 168 and the Eastern Sierra region of California. From the intersection with Route 168, it continues to the north to connect with NV 264 and provides access to the town of Dyer and Fish Lake Valley, in the state of Nevada. Route 266 travels primarily through public lands used for open range grazing. Other than several alfalfa ranches in the Oasis area, there is no development along the highway. The route is used primarily for rural goods movement and interregional access, but also connects with many dirt roads providing access to the surrounding foothills and open range lands for local and recreational use.

Within the project limits, the existing highway consists of two 12-foot paved lanes and paved or unpaved shoulders that vary from zero to four feet in width. The horizontal alignment consists of long approach tangents connected by a nonstandard horizontal curve. The proposed route adoption is consistent with a proposed curve correction project that will realign an existing nonstandard curve near PM 2.5. The existing curve has been posted for a reduced speed limit, but due to the high approach speeds and limited sight distance at the curve location, the accident rate at the curve is much higher than the statewide average for a similar facility. The proposed project will construct a new curve with an appropriate radius for the existing approach speeds and will correct existing deficiencies in the vertical profile, thus improving sight distance. The estimated cost of the project is approximately $1,100,000, which includes construction and right of way costs escalated to the year of construction. The project is fully funded in the State Highway Operation and Protection Program through the Collision Reduction Severity Program and is scheduled to begin construction in FY 2014/2015.