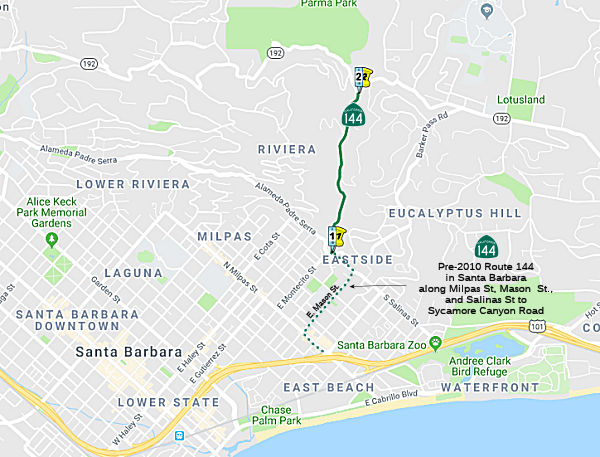 From Alameda Padre Serra in Santa Barbara to Route 192 via Sycamore Canyon.

(c) This section shall remain in effect only until the date the relinquishment authorized under subdivision (b) becomes effective, and as of that date is repealed, unless a later enacted statute, which is enacted on or before that date, deletes or extends that date.

A 1991 Thomas Brothers Map shows the route running from US 101 along Milpas to Mason Street, up Mason Street to Salinas Ave, and then up Salinas to Sycamore Canyon.

In 1933, Chapter 767 defined the route from "Cummings Valley State Institution to [LRN 58] near Old Town" as part of the state highway system. In 1935, this was added to the highway code as LRN 144 with that definition.

This route runs from Route 58 to the California Correctional Institution, formerly the Cummings Valley State Institution. This is present-day Route 202.