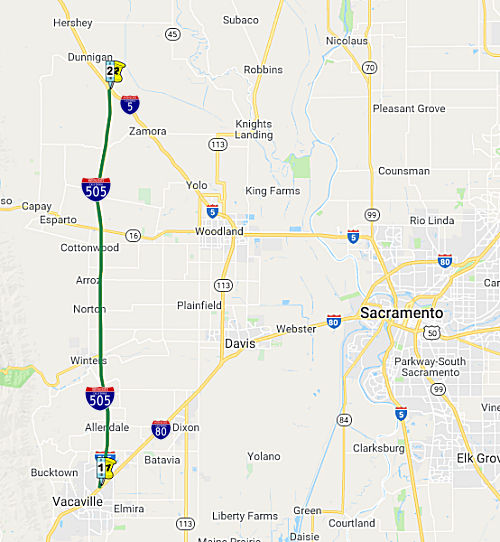 From Route 80 near Vacaville to Route 5 near Dunnigan.

In 1963, Route 505 was defined as “Route 80 near Vacaville to Route 5 near Dunnigan”, and it retains its 1963 definition. Before 1972, it was signed as Temporary I-505, and was a two lane road between Vacaville to Dunnigan. The freeway was constructed in sections: beginning with the interchanges at Route 16 and Route 128 (far in advance of any other part of the freeway). These interchanges (actually two sections of constructed freeway: A 2 mile section at the junction of Route 128, and a 1 mile section at Route 16) were part of a 1957-58 project that relocated the section of then-LRN 90 about a half-mile east of its original route that followed the SP Rumsey branch line that extended north of Vacaville to Madison before turning west along Route 16 to Rumsey (the Cache Creek valley was noted for hop production). The relocation extended between south of Winters and north of Madison and included segments angling back to the original alignment. It was constructed as a 2-lane expressway, with short 4-lane freeway segments through the Route 16 and Route 128 interchanges. There were no I-5W shields erected on that portion of the route; signage simply indicated "Redding" for NB and "San Francisco" for SB. The next segment completed was the connection between Route 16 and Route 128; then the segment from I-5 to Route 16; and finally the segment from Route 128 to I-80. The freeway was completed by 1977.
(Source: Some of this (namely the history of the first interchanges) is based on a post by Scott Parker (SParker) in "Re: I-505" on 2/25/2019)

The SAFETEA-LU act, enacted in August 2005 as the reauthorization of TEA-21, provided the following expenditures for this route:

In April 2021, it was reported that Solano County has submitted the Vaca Valley Parkway (~ SOL R1.422) and I-505 Multimodal Improvement Project for federal Community Project Funding. It is part of a list of projects that will go to Rep. John Garamendi, D-Walnut Grove, and Rep. Mike Thompson, D-St. Helena, to be included among the 10 projects each can request for the earmark dollars. The House of Representatives recently in 2021 to bring back the practice of earmark spending, which allows for individual representatives to direct spending to their districts to pay for special projects or programs. The practice had been banned since 2011, largely due the criticism that it lends itself to wasteful “pork barrel” and “special interest” spending.
(Source: Solano Daily Republic, 4/7/2021)

In January 2022, it was reported that the $16 million project was closer with the passage of the 2021 Infrastructure Bill. Approximately $10 million is earmarked from local government, $2 million from Congestion Mitigation and Air Quality Improvement funds, and the final $4 million from the federal “Infrastructure and Jobs Act.” The I-505/Vaca Valley Parkway Corridor Multi-Modal Improvements Project is planned to ease the movement of goods from industrial and manufacturing centers, improve safety and promote environmental sustainability, according to project officials. The intent is to also accelerate commercial and industrial development, accommodate job growth and housing productions, and to provide alternative transportation access for Vacaville residents.Proposed improvements include three roundabouts on Vaca Valley Parkway to promote continuous moving traffic and a separate bicycle/pedestrian bridge that will connect the east and west sides of I-505. The last time the county improved infrastructure like this was the Solano Water Project and the building of the dam at Lake Berryessa.
(Source: Solano Daily Republic, 1/7/2022)

In April 2007, the CTC considered relinquishment of right of way in the county of Yolo, at County Road 24 (~ YOL 9.547), consisting of reconstructed and relocated county roads and frontage roads. 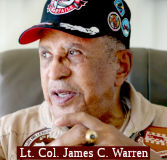 The interchange of I-80 and I-505 in the County of Solano (~ SOL R0.097) is named the "Lieutenant Colonel James C. Warren Memorial Interchange". It was named in memory of Lieutenant Colonel James C. Warren, who was born in August 1923 into the racially segregated community of Gurly, Alabama.Warren left the region at the age of 15 years, when his mother sent him to Island Park, Illinois, where he attended high school. Enlisting in 1943 to preflight with the Tuskegee Airmen, the all black United States Army Air Force unit that distinguished itself in combat during World War II, Lieutenant Colonel Warren was assigned to Indiana’s Freeman Field, where, after being eliminated from pilot training, he completed navigator training, through which he qualified as both a navigator and a bombardier. Lieutenant Colonel Warren was one of the 101 black officers at Freeman Field in 1945 who were arrested and charged with mutiny because they refused to comply with base regulations excluding black officers from a base officers’ club. The service records of Lieutenant Colonel Warren and the other 100 officers were cleared by the Air Force in 1995, an action that was announced that year during a convention of the Tuskegee Airmen. After serving with the 477th Bombardment Group of the Tuskegee Airmen, Lieutenant Colonel Warren spent 35 years with the United States Air Force, for which he flew 173 combat missions in Korea and Vietnam, earning such esteemed commendations and decorations as the Congressional Gold Medal, Distinguished Flying Cross with two Oak Leaf Clusters, and Air Force Commendation Medal, among numerous others. A University of Nebraska graduate who ultimately became the oldest individual to earn a pilot’s license at the age of 87 years, Lieutenant Colonel Warren distinguished himself through his community leadership and participation in the Nut Tree Airport’s Young Eagles program, as well as his membership with the Jimmy Doolittle Air and Space Museum Foundation, the Kappa Alpha Psi Fraternity, and Tuskegee Airmen Incorporated. Named by Senate Concurrent Resolution (SCR) 24, Res. Chapter 108, Statutes of 2015, on July 16, 2015.
(Image source: Solano Daily Republic)

The segment of I-505 between the I-80 interchange (SOL R0.0) and the Vaca Valley Parkway (~ SOL R1.422) in the County of Solano is named the CHP Officer Kirk Griess Memorial Highway. It was named in memory of Kirk Anthony Griess, born in July 1972 in Robbinsdale, Minnesota. After graduating in 1990 from Wahpeton High School in North Dakota, Kirk started his life of service at 18 years of age, enlisting in the United States Marine Corps, proudly serving for four years, including a deployment to Japan, and earned the rank of Corporal before his discharge in 1994. Officer Griess graduated from the California Highway Patrol Academy and worked in the Oakland and Contra Costa offices, finally settling in the Solano office where he worked for 16 years. He was active in the community of Vacaville where he coached his kids’ youth soccer and baseball teams. On August 10, 2018, while conducting a traffic stop on westbound I-80 east of the Manuel Campos off-ramp, Officer Griess was struck and killed by a distracted and reckless driver. Named by ACR 4, Chaptered 07/08/19, Res. Chapter 105, Statutes of 2019.
(Image source: California Assn of Highway Patrolmen)

Approved as chargeable Interstate on 7/7/1947; Freeway. In August 1957, this was tentatively approved as I-5W. In November 1957, the designation I-7 was proposed as part of the first attempt to give urban routes numbers (there were no 3-digit routes at the time). In April 1958, it was proposed to be designated I-115 as part of the first attempts to assign 3-digit numbers. It was finally approved as I-5W, and later renumbered as I-505.