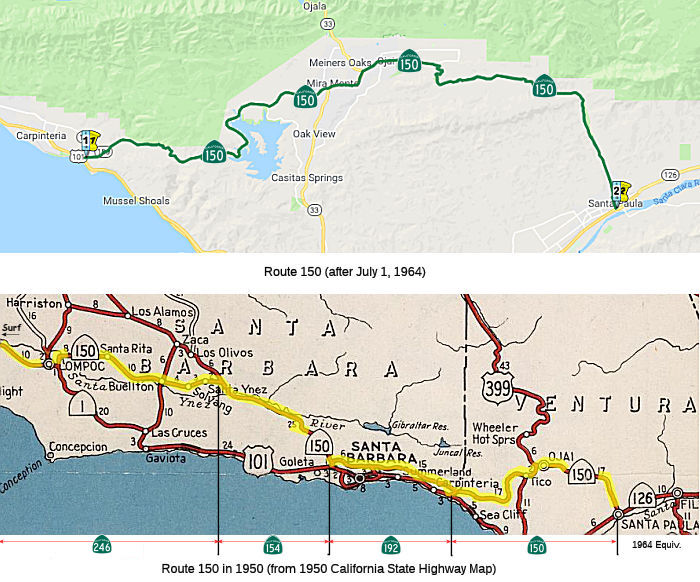 From Route 101 near the Ventura-Santa Barbara county line to Route 126 near Santa Paula.

In 1934, Route 150 was signed along the route from Surf to Jct. Route 126 at Santa Paula, via Santa Barbara and Ojai. It consisted of the following segments:

The route was opened in 1897. Before the construction of US 101, it was part of the main highway between Los Angeles and Santa Barbara.

At some point between 1936 and 1938 a small segment of State Highway was added that aligns with present Route 154 on San Marcos Pass Road between US 101 and Route 192. It appears this segment of highway was a spur of LRN 80 (according to the 1959 definition) and can be seen appearing by comparing the Santa Barbara Area on the 1936-37 State Highway Map to the 1938 Edition. This small portion of highway is important since it appears to have ultimately been the driving force for Route 150 breaking into several highways. Beginning in 1950 construction of Bradbury Dam in Santa Barbara on the Santa Ynez River began and was completed by 1953. This required that much of Route 150 between Santa Ynez and Devaul Canyon be relocated uphill to the south of future site of Lake Cachuma. Presently this alignment is still in use as San Marcos Pass Road on Route 154.
(Source: Gribblenation, "California State Route 150 family of highways (CA 246, CA 154, CA 192 and CA 150)", visited on 11/9/2019)

In August 2011, the CTC approved $753,000 in SHOPP funding for repairs near Santa Paula, at Reeves Road and at Rafferty Ranch Road, that will restore 8.5 acres of riparian and upland habitat as required on and off site mitigation for environmental impacts on previous emergency projects at two locations. (FCO)

Planned as freeway in 1965; never upgraded. Not in the Freeway and Expressway system.

This was once planned as part of the Santa Paula Freeway.

This definition remained unchanged until the 1963 renumbering. It is present-day Route 225.