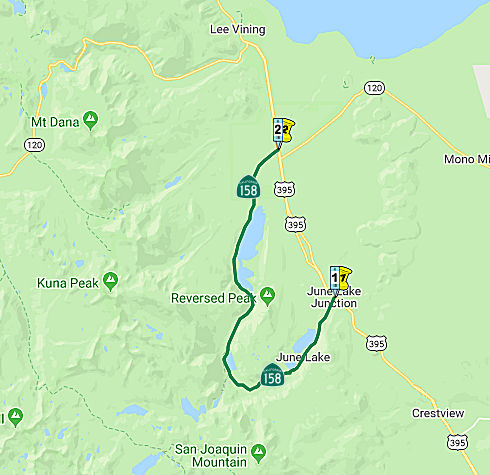 The section of roadway south from the north terminus of Route 158 was constructed during 1915 to Silver Lake for a hydroelectric project on Rush Creek. The roadway from the southern terminus was built from June Lake Junction, past June Lake, to Silver Lake by 1924. Apparently there was enough people in 1927 at June Lake to warrant postal service.
(Source: Tom Fearer (Max Rockatansky) on AARoads, "CA 158 June Lake Loop", 7/9/2017)

This showed the growing planning for the San Diego Freeway, which now ran as far as the Long Beach Freeway.

In 1951, Chapter 1562 combined the segments and extended the route from the Long Beach Freeway to the El Toro Y: "[LRN 4] near San Fernando to [LRN 2] in the vicinity of El Toro; provided, however, that Section 600 of this code shall be applicable to that portion of said route southerly of [LRN 167] near Signal Hill the same as if said portion had been added by the Collier-Burns Act of 1947, and the Department of Public Works shall not be required to maintain any portion of said route until the same has been laid out and constructed as a state highway"

In 1955, Chapter 1488 removed the language relating to section 600 (actually, it just made that language a general condition as Section 2109 of the code).

LRN 158 is present-day I-405; before the freeway was constructed, this LRN also applied to pre-1963 Route 7 between the US 99/US 6 junction and Route 107. The original route was along Sepulveda to the intersection with LRN 60 (Lincoln Blvd).