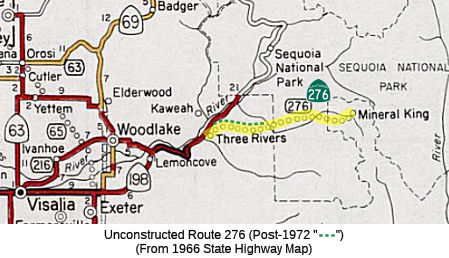 This routing was originally considered by the Legislature as a possible toll road to a proposed recreation complex planned by Disney in the Mineral King area near Sequoia National Park (see http://www.yesterland.com/mineralking.html).This route went all the way to Mineral King, but a 13-mile portion of the highway was later rescinded. Much of that segment is now within Sequoia National Park. It was not in the park at the time of adoption, nor at the time of recission. The proposed routing now ends a little west of the park border.

In December 1965, the U.S. Forest Service awarded a preliminary permit to Walt Disney Productions giving the company three years to complete a satisfactory plan for the resort, as a prelude to a permanent 30-year permit. Disney planned a $35 million year-round resort that was estimated to attract 2.5 million visitors annually by 1976, the first full year of operation. The 30-year permit was contingent on an all-weather, 25-mile highway. The route would go through Sequoia National Park. In 1958, recognizing that Mineral King had possibly the greatest potential for winter sports anywhere in the Sierra Nevada mountains, Tulare County asked the State of California to put in an all-weather road. There was finally progress in 1965 when the state legislature transferred the county road into the state highway system in anticipation of a new road. As 1966 progressed, plans for the highway moved ahead. In October, California Governor Edmund G. “Pat” Brown announced a $3 million Federal grant toward the $25 million price tag for the road. His next step would be to apply for a $9 million Federal loan and to seek the balance from the California legislature. On December 15, 1966, Walt Disney died, but the Mineral King resort was destined be one of many lasting reminders of his vision. The U.S. Forest Service approved Walt Disney Productions’ master plan for Mineral King on January 27, 1969. Skiers could expect the resort to open for the Winter 1973 ski season, when the new road would also be ready. However, during the years leading up to the approval, opposition to the Mineral King plans and the all-weather road had been growing. There was still the issue that the road would have go through Sequoia National Park. As far back as March 1967, U.S. Secretary of Interior Stewart Udall expressed opposition to the road, suggesting that an electric railway or monorail would be better. In May 1972, Walt Disney Productions announced a major revision to its Mineral King plans, shrinking the resort to a $15 million resort with 10 ski lifts. With respect to the road, the biggest change was that access to the resort would primarily involve a 15-mile cog railway to be financed with a $20 million Tulare County bond and operated by Disney without a profit. The railway would be nonpolluting, follow the old road, and require a much narrower right-of-way than the proposed all-weather road. On August 18, 1972, California Gov. Ronald Reagan signed legislation removing a segment of the all-weather road from the state’s highway system. By October 1973, the resort appeared doomed. With the Sierra Club still using the legal system to oppose the project, Mineral King was expected to be tied up in the courts for years. The legality of the proposed cog railway was called into question. Most importantly, a new law meant the project required an environmental impact statement. All work stopped until the completion of that assessment in 1976. In 1977, the U.S. Forest Service attempted to revive the resort plan, but by then Walt Disney Productions had walked away from the Mineral King environmental fight in favor of an entirely different ski resort location on private land at Independence Lake, north of Lake Tahoe. In 1978, Congress removed the 16,200 acres of Mineral King from the National Forest and annexed it to Sequoia National Park. The bill even had language prohibiting downhill ski facilities at Mineral King.
(Source: Yesterland - Walt Disney's Mineral King, 11/11/2018, focusing on the sections related to the development of the roadway to the resort; MousePlanet 6/10/2019)

This routing is unconstructed, but a route has been adopted. The portion to Mineral King was adopted in 1967. The portion between Oak Grove and Mineral King was rescinded in 1972. The existing road (Mineral King Road, MTN 375 (a county designation)) is inadequate (narrow, winding, steep grades), and it is not recommended that the state adopt the road.

[The "MTN" designation is part of a whole system of county roadways in the Sierras. They cross county lines and use Caltrans style postmile markers. For instance, Mineral King Road is MTN 375, and the Great Western Divide Road, that heads south through Sequoia National Monument, is MTN 107, while MTN 99 gets into Kern County all the way to Route 178. You can see some of them on Google Maps as road names. There is a USFS map that references a few of them, though it uses a state highway marker for MTN 107: http://www.fs.usda.gov/detail/sequoia/recreation/?cid=fsbdev3_059482. It appears that almost every little road in the Sierras falls into this system and has a number, even when they lack milemarkers. You can sometimes find the numbers on, of all places, Zillow. The MLS entry will often list the Mountain Road number on some of the more random roads.]
(coatimundi @ AAroads, Topic: ""MTN" Milemarkers", 6/28/2016 and 7/5/2016)