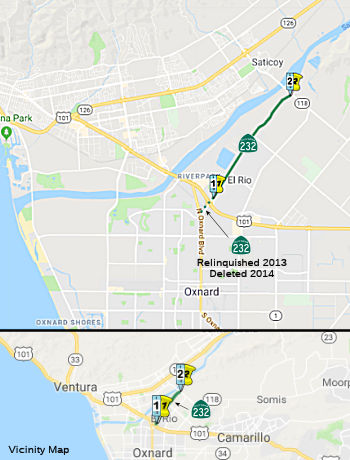 This route was defined in 1963 as running "From Route 1 near El Rio to Route 118 near Saticoy." Planned as freeway in 1965; never upgraded. The freeway alignment, according to an 1983 Thomas Brothers, would have run between Rose and Santa Clara from a point Westerly of Los Angeles (where it met a new alignment of the Route 118 freeway) W and S Westerly of Rice to Route 1. The intent may have been for the Route 232 freeway to be a continuation of the proposed Route 118 freeway; and to become the Route 1 freeway S of US 101 (that's what the 1983 Thomas Guide shows)

In March 2013, the CTC relinquished right of way in the city of Oxnard on Route 232 from Oxnard Boulevard (Route 1) to Route 101, under terms and conditions as stated in the relinquishment agreement, determined to be in the best interest of the State. Authorized by Chapter 717, Statutes of 2008, which amended Section 532 of the Streets and Highways Code.

In 1949, Chapter 1467 added the route that would become LRN 232 as LRN 207: “[LRN 207] is from Sacramento to Marysville; provided, however, that Section 600 of the Streets and Highways Code shall be applicable to the route added to the State Highway System by this section the same as if said route had been added by the Collier-Burns Highway Act of 1947, and the Department of Public Works shall not be required to maintain any portion of said route until the same has been laid out and constructed as a state highway” In 1951, Chapter 1562 renumbered this duplicate [LRN 207] as [LRN 232].

This route ran from Sacramento to Marysville along Jiboom Street, Garden Highway, and El Centro Road starting at the junction with former Route 16/Route 24 (LRN 50) near "I" street. This was unsigned until sometime in 1959-1960; it shows up as part of Route 24 as of the 1960 State Highway Map. It is now now county-maintained from West Natomas north to Elkhorn (near I-5), Route 99 from I-5 north to Catlett and Route 70 to Olivehurst. (Some of El Centro Road/Avenue/Boulevard has been bypassed by the freeway routings of Route 70 and Route 99 between Elkhorn and Olivehurst).