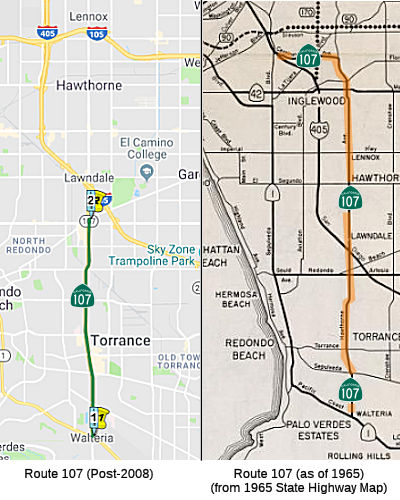 From Route 1 in Torrance to the southern city limits of Lawndale.

In 1963, this route was defined as the route from "Route 1 near Torrance to Route 405 near Culver City." The route continued when Hawthorne changed to La Brea, and then followed Centinela to end at Route 405 in Culver City (before the interstate, the routing ended at Sepulveda Blvd, Route 7).

In 1998, the definition was updated to allow the portion of Route 107 in Lawndale to be relinquished if the city and state agree to do so. This relinquishment was authorized by AB 2132, Chapter 877, signed September 26, 1998. However, the definition remained "From Route 1 near Torrance to Route 405 near Lawndale [Hawthorne Blvd.]".

(a) The commission may relinquish to the City of Torrance the portion of Route 107 that is located within the city limits of the city, upon terms and conditions the commission finds to be in the best interests of the state.

(d) The city shall ensure the continuity of traffic flow on the relinquished portion of Route 107, including, but not limited to, any traffic signal progression.

Planned as freeway in 1965; never upgraded. The freeway planning was an offshoot of attempting to build a Route 1 freeway. While the Route 1 alignment through Long Beach and Wilmington was pretty much due E-W, at its western end it curved north to avoid Palos Verdes (another NIMBY stronghold!), threading the needle between PCH and the massive Mobil refinery between Western Ave. (Route 213) and Crenshaw Blvd. in Torrance. Rather than draw the ire of coastal residents in Redondo Beach, the freeway facility left the Route 1 corridor east of Hawthorne Blvd. and became a freeway segment of Route 107 north to a terminus at I-405 near Lawndale. The original plan for the route would have had Route 107 (the Torrance Freeway) curve south and east through the South Bay. There were originally four color-coded proposed routes that were presented on July 15, 1968. All the proposed routes—red, blue, green and yellow—began at I-405 near Compton Boulevard (now Marine Avenue) and eventually ended in the vicinity of Five Points in Harbor City. At that point, Route 107 would link up with the Pacific Coast Freeway (Route 1). The routes were:
(Source: Note: Some information in the above is from Sparker @ AAroads, 8/14/2016; the rest is from EIRs on construction of Route 107)

Planners also included three shorter segments labeled A, B and C that could be used in combination with the colored routes to create additional route options.

All of the routes would have traveled through Lomita, and this was their demise. The Department of Highways estimated that more than 1,100 single-family residences, 18 to 64 commercial structures and one to eight industrial plants could be affected. Officials debated the various options, but in the end, proponents of a "no build" option found support in the Lomita City Council, which unanimously opposed all the routes. Other cities felt differently: Torrance voted in favor of a slightly modified red route, a choice later endorsed by Redondo Beach and Rolling Hills Estates. Yet Lomita's refusal was the killer, as the State Highway Code forbids the state to close any city streets for a freeway without the city's permission. At one point, Lomita officials suggested using an abandoned Pacific Electric line near Normandie Avenue (creating an option called the Orange Route. This segment would have followed the abandoned line and swing through southeast Torrance before connecting to the rest of the proposed freeway. Howevr, this outraged Torrance residents and city officials, who unanimously opposed the change (plus Lomita's didn't like it either). Redondo Beach, Torrance and Rolling Hills Estates officials eventually joined Lomita against the freeway. By 1972, the freeway was all but officially dead.

According to Scott Parker, while the Lomita-Torrance segment of the Pacific Coast/Hawthorne freeway system was rife with controversy, it was the Route 1 segment east of there traveling through Wilmington and Long Beach that attracted the most attention as well as negative sentiments and subsequent comments, since it tore up a number of old-stock houses and commercial structures by passing through an arguably historic district immediately north of downtown Long Beach (more or less along 10th Street). Unlike the Torrance section to the west, this one had been formally adopted, with the ROW "set in stone", since the early '60's. Its eastern end segued onto Route 22 on East 7th Street, which fed directly east into the I-405/I-605 interchange. By the beginning of 1975, Caltrans had acquired about half of the required ROW west as far as the west limits of the adopted section, at Western Ave. in Harbor City; construction, slated to start in late 1978 or early 1979, was to proceed east to west. With the advent of the decidedly anti-freeway Gianturco regime at Caltrans at the beginning of 1975, a review of urban freeway mileage -- whether formally adopted or simply future corridor concepts -- was underway as the beginning of a major "purge". The Long Beach section, since even within its advanced planning stages was the subject of localized protests against its development, stood out -- and became the well-publicized "poster child" for the program of eliminating as much unbuilt urban freeway mileage as possible. So by mid-1976 the plans had been shelved, the adoption rescinded, and the ROW put up for sale; the last state-owned property had been disposed of by 1980. Of course the Torrance extension, which had been on indefinite hold since 1974, was itself formally rescinded at the same time -- so the full Route 1/Route 107 "loop" from the east side of Long Beach to I-405 in the Lawndale vicinity was off the books after that. And with the Coastal Commission having, after 1977, effective "veto power" over projects within the shoreline watershed (which decidedly included the territory traversed by that loop), the entire notion of a freeway approximating that original concept would be D.O.A. from that point forward.
(Source: Scott Parker on AARoads ("Re: The Torrance Freeway would have changed the face of the South Bay"), 7/19/2019)

In late March 2007, the City of Torrance indicated its desire to take over the segment of this route within its city limits. Specifically, the Torrance City Council voted unanimously to send a letter indicating its interest in having the state Department of Transportation relinquish control of the 5-mile segment of Pacific Coast Highway and 6-mile stretch of Hawthorne Boulevard within Torrance limits. Sending the letter is a precursor to an estimate the city is required to provide to Caltrans of the cost of bringing each road up to a "state of good repair." City staff members believe it will cost $25M to $30M for each road, which the state would provide to the city in the form of a one-time payment. Bringing the route under city control will allow the city to improve the timing of signal lights to improve traffic flow and reduce the bureaucracy needed to upgrade the roads.
(Source: Daily Breeze, 3/29/2007)

The intersection with Route 1 in Torrance (LA 0.000) is being reconstructed under TCRP Project #46. This project was to reconstruct the intersection of Hawthorne Boulevard (Route 107) and Pacific Coast Highway (Route 1) by adding turn pockets. The cost to complete PA&ED was significantly underestimated in the original application, and additional TCRP funds are required to complete the phase. With R/W estimated to be over $26,000,000, the overall project cost has exceeded the total TCRP funds available. Per the September 2006 CTC Agenda, until such time as the City of Torrance and the Department can identify additional funds to complete PS&E, R/W, and Construction, those phases have been put on hold. In order to complete PA&ED and closeout the phase, an additional $467,000 of TCRP funds is required. Note: According to the Daily Breeze on 3/29/2007, this project was originally began by the City of Torrance, and was to consist of a right turn lane from northbound Hawthorne Boulevard to eastbound Pacific Coast Highway. The project was estimated to cost about $2 million. Caltrans took over the project, changed the scope of the improvements to include the entire intersection, studied and designed it at a cost of $2 million, and concluded that upgrading the entire intersection would cost $15 million.

The segment from Route 1 to Route 405 (in anticipation of freeway construction, which never materialized) was named the "Torrance Freeway". It was named by Assembly Concurrent Resolution 63, Chapter 171, in 1968. Torrance refers to the City of Torrance, which was planned in 1911 as a model city and named by the owner of the land, Jared S. Torrance.

Prior to 1968, this route was named the "Hawthorne Freeway", by location. It traverses the city of Hawthorne, which was named, about 1906, for the great American novelist.

In 1933, Chapter 767 added the following segments to the state highway system:

In 1935, LRN 107 was added to the state highway system with the following routing:

In 1949, Chapter 1044 changed the definition to include the Dumbarton Bridge, making the terminus of segment (b) "[LRN 68] near Palo Alto". This was part of an act that authorized the acquisition and operation of the Dumbarton Bridge, and that they shall be operated as state highways. This change became effective once the California Toll Bridge Authority acquired the bridge.

In 1959, Chapter 1062 combined and extended (b) and (c). It then swapped the two segments, making (a) "[LRN 56] to a point near Sunol, on the highway described in subdivision (b) of this section", with (b) going from Walnut Creek. to Scotts Corners.