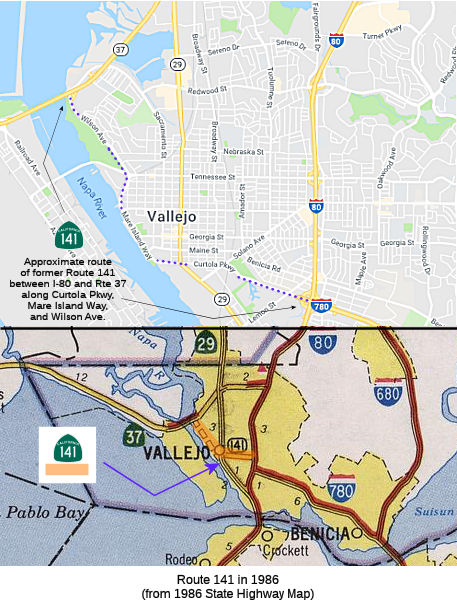 Directly west of I-80 the path of I-780 becomes non-state maintained Curtola Parkway. During the 1964 State Highway renumbering Route 141 was assigned to the former portion of LRN 74 between I-80 and Route 29. At the time Route 141 appears to have used Lemon Street, Benicia Road and Maine Street to connect from I-80/I-680 to Route 29 (Sonoma Blvd).
(Source: Gribblenation Blog (Tom Fearer): Interstate 780 and path of California State Route 141, 2/22/2019)

In 1988, SB 177, Chapter 106 deleted the route. This route approximates the current Curtola Parkway and Mare Island Parkway between Route 37 and I-80/I-780. Relinquishment may have occured as a condition of the construction of Mare Island Parkway. The Curtola Parkway's construction began in 1988 as well, with the facility opening in late 1989. It does not appear as if the parkway was a Caltrans project. Apparently Caltrans ceded the ROW for the cancelled Route 141 freeway to the City of Vallejo, which constructed the parkway itself; it was part of an overall project to upgrade the city's waterfront (including the S.F. ferry terminal). Since there was a direct extension of the parkway from Sonoma Blvd/Route 29 west to that waterfront, the parkway was intended to directly convey traffic -- and potential tourists -- from both I-780 and I-80 to the revamped waterfront -- as well as provide improved access from Benicia and environs to the ferry terminal.
(Source for information on the Curtola Parkway: Scott Parker (SParker) on AAroads, "Re: Interstate 780 and California State Route 141", 2/23/2019)

LRN 74 was unusual in that it was U-shaped, consisting of Pre-1964 Route 29 from Pre-1964 Route 12/LRN 8 at Napa Junction south to the intersection of present Route 29 and Maine Street in Vallejo; there it split into the main stem which extended east on Maine to Benicia-Vallejo Road, then utilized that into Benicia; the surface street was never signed as a pre-1964 route prior to 1964. However, Pre-1964 Route 29 south from the intersection in Vallejo to I-80 just north of the Carquinez Bridge(s) was a LRN 74 spur. Once in Benicia, it spawned another spur to the ferry terminal to Martinez, across the Carquinez Strait; this, and the remainder of LRN 74 north to Cordelia Junction (old US 40/LRN 7) were signed as part of Pre-1964 Route 21, which utilized the ferry to get to its southern section in Contra Costa and Alameda counties. By late 1962 the initial section of I-680 from the present I-80/780 interchange in Vallejo east toward Benicia had opened, and LRN 74 was rerouted over that freeway; two years later Route 141 subsumed the section of LRN 74 between Route 29 and I-80, although the east end had been shunted south to the NW end of (then) I-680, which entailed about a 2-3 block right-angle shunt south of Benicia-Vallejo Road. Route 141 received signage circa 1968; this involved trailblazers and an initial reassurance shield on EB Maine, directional changes where the route shifted to Benicia-Vallejo Road, and I-680 (later 780) trailblazers at the shunt down to the end of that freeway about a quarter-mile west of I-80. The sole Route 141 indication WB was at the stub-end of the I-680/780 freeway, which was originally planned to continue on to Route 37 via Mare Island. That freeway routing was deleted from the system in 1976 along with a batch of others statewide as part of then-Caltrans director Adriana Gianturco's orders to slash as much urban proposed freeway mileage as possible (with legislative concurrence). Signage remained on the surface segment of Route 141 until that too was relinquished circa 1982. One "straggler" Route 141 sign remained at the Maine/B-V Road intersection until about 1989, but it disappeared about that time.

In 1963, Chapter 1698 changed the routing to be "[LRN 4] via Brundage Lane, Union Avenue and Golden State Avenue and Oak Street to [LRN 4] near Bakersfield Beardsley School", although this change didn't take effect due to the 1963 Renumbering (Chapter 385); instead that routing was assigned to Route 204.

The original routing for LRN 141 is in Bakersfield, and is no longer part of the state highway system, although Brundage Lane roughly parallels present-day Route 58, and Oak Street parallels the post-1964 routing of Route 99. This appears to be the planned rerouting for US 466 to bypass downtown Bakersfield (back when LRN 4/US 99 (and US 399) was on the Route 204/Business Route 99 alignment) back in 1933; this rerouting only occured in the 1960s however with the construction of the freeways which are now Route 58 and Route 58/Route 99 (explaining why the definition of the route is from LRN 4 to LRN 4: from Brundage at Route 204 to the current Route 99/Route 58/Route 178 interchange at Rosedale Highway/24th Street, where Oak Street ends). Looking at the bridge log, the Route 204/Business Route 99 (former LRN 4) freeway in downtown Bakersfield between LRN 141's two termini (current Route 58 and Route 99) was built in stages: the first section, the Union Avenue Y, was finished in 1957, followed by the Truxtun Avenue crossing in 1959. Most of the section north of L Street and the Chester Avenue traffic circle was also built in 1957; so the construction of the LRN 141 (99/58) freeways occured only once CalTrans decided that the old downtown bypass was more suitable for the through routes. The interchanges connecting Business Route 99 with Route 99 were built in 1962 and 1963, as part of the Bakersfield bypass. Thus by 1964, former LRN 141 had been upgraded to freeway between Brundage Lane and Rosedale Highway; however, the portion from Union Avenue (Route 204/Business Route 99) west to Route 99 would not be built until 1976, at which point Route 58 was moved off of former US 466/LRN 58 (Edison Highway) and onto the new freeway, which is part of the Bakersfield-Tehachapi Highway.