As defined in 1963, this route ran from “Route 280 near Woodside to Route 101 at the Harbor Boulevard Interchange in Redwood City.”

Over on AAroads, Sparker had some interesting observations on the routing shift (edited slightly):

Sometime in the mid-'70's, the definition of Route 84 and Route 114 "swapped" alignments; originally Route 114 was supposed to be Woodside Road from US 101 west to I-280, while Route 84 went west through Menlo Park and Stanford to I-280; the intent was to jog north on I-280 to the current Route 84 alignment, while Route 114 would head east and Route 84 west. Obviously D4 planners had likely never met or conversed with residents in Menlo Park, Palo Alto, as well as Stanford student activists; the plan to put an expressway or freeway largely down San Francisquito Creek (the dividing line between Santa Clara and San Mateo counties) would have been summarily abandoned if the residents could and would be heard. But it took about a dozen years after the Route 84 line on the map was drawn until the concept was effectively dead (money talks very loudly in that area!), and Route 84 was moved up to Redwood City. Route 114 took over the Menlo Park alignment, but a formal route adoption never took place. The only consistent backers of the plan were the owners of the Stanford Shopping Center; the route would have passed along the north end of their parking lot! But once Stanford announced that they would never sign street-closure agreements for the route if it came to pass, the plans were cut back -- first to Route 82, and then all the way to US 101. Route 114 never stood a chance in this area -- and Caltrans District 4, despite periodic (and possibly quixotic) attempts at trailblazer signage along US 101, has no plans to sign the short "stub" route.
(Source: Sparker on AARoads, 6/19/2018) 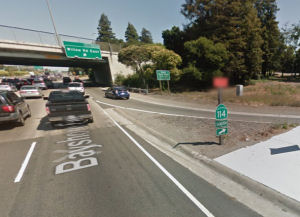 For the longest time, this route was not signed as Route 114. In August 2015, it was reported that Google Maps had actually captured an image of the route being signed, at the offramp for Willow Road east from US 101. However, it appears that with construction in the area, this sign may be gone.

Overall statistics for Route 114 (this reflects only the portion from US 101 to Route 84):

This route ran from US 101 near Ford Road to Bypass US 101 near Mountain View. This is present-day Route 85.