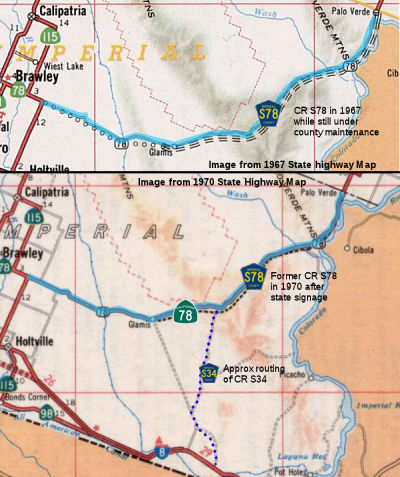 This is the present routing of Route 78 between Route 115 and the Imperial/Riverside County line.

The portion of Route 78 E of Route 115 was LRN 146, and was a proposed route between Brawley and Palo Verde, and constructed between Palo Verde and Blythe. It was unsigned until Palo Verde. From Palo Verde to Blythe, it was signed as Route 195 until the signage of Route 195 N from Blythe as US 95. It was defined from the Riverside County line to I-10 in 1933; the remainder was defined in 1959. A 1967 map shows the routing between Midway Well and Route 115 as County Sign Route S78, with Route 78 signed with Route 115 between the Brawley area and US 80.

The 1963 definition of Route 78 included the following text:

Notwithstanding the provisions of Section 89 of Chapter 1062, Statutes of 1959, the department shall proceed with the construction of the unconstructed portion of said route described in subdivision (c) between the easterly junction of Route 115 and the Imperial-Riverside county line with the lowest practical cost for a hard surfaced road and as an interim project pending the later construction of the route to proper limited access standards; provided, that prior thereto the County of Imperial enters into a co-operative agreement with the department wherein the county agrees to maintain the road between the easterly junction of Route 115 and the Imperial-Riverside county line until a limited access highway is constructed by the department between said points. Upon the completion of construction of said interim road, and pursuant to said agreement, the county shall assume jurisdiction and all responsibilities of maintenance for the period above provided. The road shall be known and designated as the "Ben Hulse Highway."

The italicized portion makes clear that the segment between Route 115 and the Imperial-Riverside County line was under County jurisdiction and maintenance, and was quite likely what was signed as Imperial County Sign Route S78. The wording about county jurisdiction was removed in 1968. By the 1970 State Highway map, the road shows as being signed as Route 78, although portions of the limited access route were still under construction.