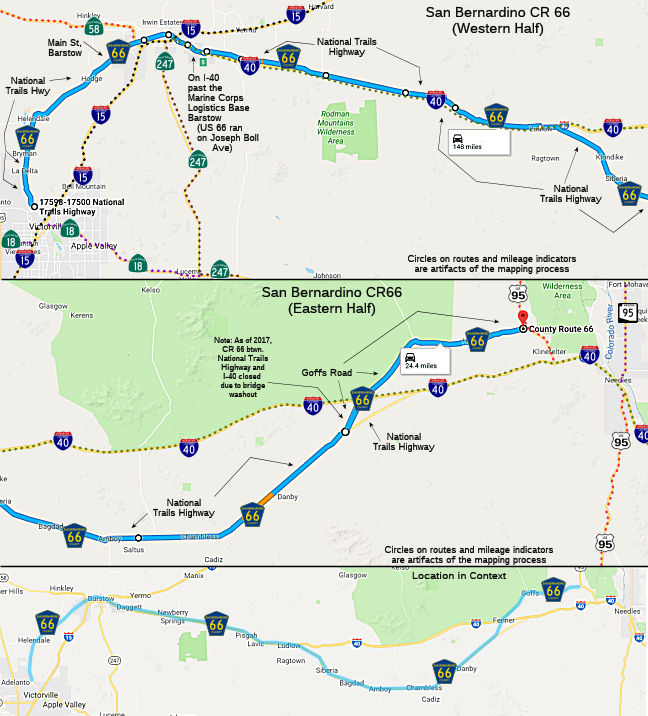 National Trails Highway, beginning in the community of Oro Grande to Goffs Road, and then continuing northerly on Goffs Road to its junction with US 95.

This route was created on September 27, 2011 (Resolution 63) by the San Bernardino County Board of Supervisors. Per the resolution, Caltrans was requested to install marker signs on I-40, Route 58, Route 247, and I-15 in the Barstow Area, and US 95 in the Goffs Area. The resolution also recommended that the County provide San Bernardino County Sign Route 66 signs and materials to the City of Barstow for marking the route within the City, as this program supports the County’s goals, and objectives and supports the social needs of the population of the County. It was noted that this alignment can be expanded to include additional portions of or the entire Route 66 at a later date. It was also noted that at their September 19, 2011, meeting, the Barstow City Council agreed to participate with the County in establishing this program and adopted a resolution that established County Route 66 within its municipal limits. In Barstow, the route is along Main Street.

As of 2019, it was reported that the route was signed to the terminus in Needles.

In 2021, a Draft EIR was published regarding replacement of a number of historic bridges.
(Source: SBD County "Notice of Preparation of a Draft Environmental Impact Report for the National Trails Highway at 10 Bridges Project", April 2021) 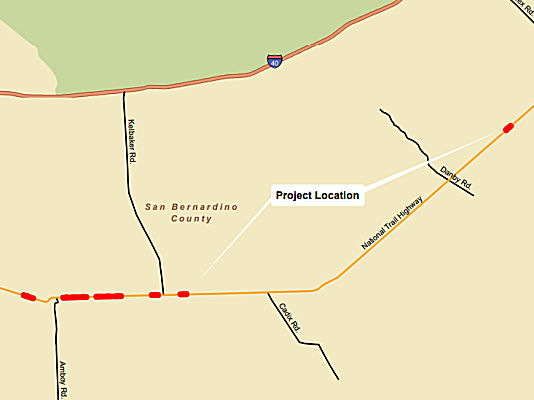 The County of San Bernardino, in coordination with Caltrans, is proposing to replace 10 bridges on the National Trails Highway (NTH), also known as former US 66. The existing bridges were constructed in 1930 with simple timber girders and a continuous castin-place/reinforced concrete deck. The bridges span over various manmade ditches that were created to channel surface drainage flows. The bridges are supported on closed-end backfilled timber pile extension strutted abutments and timber pile extension bents. They now have asphalt overlays. At Cerro, Gordo, Cerulia, Leith, Terra, Sombra, Beacon and Larissa supplemental timber bents and columns were installed at the midspan doubling the number of supports and spans at these bridges. All ten existing bridges are classified Structurally Deficient and have sufficiency ratings from 22.2 to 61.2. All but Bristol Ditch has a sufficiency rating below 50. The existing bridges are proposed to be replaced with reinforced concrete bridges. The existing soil is sandy and susceptible to scour, so pile extensions would be utilized at the piers and the abutment foundation would be supported on piles. The bridge barrier would be steel California ST-75 Bridge Rail painted white which is Manual for Assessing Safety Hardware (MASH) approved and best matches the existing railing. The bridge lengths would match the existing lengths if possible, but would be lengthened as needed to convey the storm flows. The width of each replacement bridge would be 40 feet to accommodate two 12-foot lanes, two 6-foot shoulders and the 2-foot railing. The vertical profile of the bridges will remain close to the existing profile except for those bridges locations in which it is determined that additional vertical clearance is required to provide sufficient water conveyance beneath the bridge. It is anticipated that any such necessary changes in vertical profiles would be 2 feet or less, with the elevation gradually conforming to the existing roadway elevations.
(Source: SBD County "Notice of Preparation of a Draft Environmental Impact Report for the National Trails Highway at 10 Bridges Project", April 2021)

The National Trails Highway is posted at a speed limit of 55 miles per hour, with all the bridges located on straight segments of the road. The alignment would remain unchanged; however, approach road work, up to 800 feet, on either side of each bridge may be needed to conform to the existing roadway vertical profile. Grading along the approaches and around the bridges may be needed to ensure storm conveyance and drainage of the area. Temporary low-water crossing detours would be constructed to accommodate through-traffic during construction. Construction of each bridge replacement is expected to be completed in one season, limiting the time the detour would be in place to one season as well. Permanent acquisition of right-of-way is not anticipated to be needed; however, temporary construction easements may be needed to accommodate construction of the temporary detour routes. The existing utilities include a fiber optic telecommunication line and a solar powered local utility line. Both of these utilities may require relocation as part of this project. All utility relocations would be included within the defined limits of the 10 Bridges project area.
(Source: SBD County "Notice of Preparation of a Draft Environmental Impact Report for the National Trails Highway at 10 Bridges Project", April 2021)

This route is part of "Historic Highway Route 66", designated by Assembly Concurrent Resolution 6, Chapter 52, in 1991.