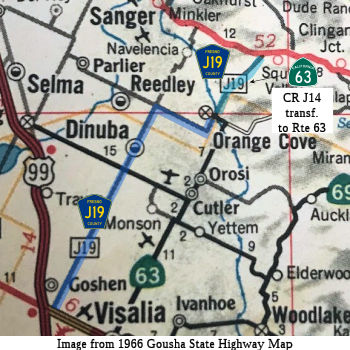 This route was defined in 1964. It originally continued all the way to Route 180, along present-day Route 63. In 1965, Chapter 1372 deleted the portion of Route 63 (former LRN 130) from Orosi to Route 69 (present-day Route 245), and transferred the portion of former Route 226 (also part of LRN 132) from Orosi to Orange Cove to Route 63. It also transferred a portion of County Sign Route J19 from Orange Cove to Route 180 to the route, making the last segment of Route 63 "Route 198 to Route 180 via the vicinity of Orosi and Orange Cove." The deleted portion is now County Sign Route J40, also known as Avenue 416 and Boyd Drive.
(Source for supporting info and base map graphic: Gibblenation Blog, "California State Route 63")

Scott Parker on AARoads noted: Originally County Sign Route J19, when fully signed, was a major "cutoff" route for traffic from southward Route 99 (US and CA) to General Grant and Kings Canyon, particularly after Route 99 became a free-flow road north of Bakersfield. Its southern terminus was at Route 198 immediately east of the Route 99 interchange -- in fact, there was a "to J19" sign on NB Route 99 up until Tulare County started removing the pentagons in the late '80's; control cities of Dinuba and Orange Cove were listed on the roadside BGS. If the destination was along the eastern portion of Route 180, one could remain on Route 99 much longer and avoid both the slog through Lindsay and Exeter on Route 65 as well as the myriad of hairpin turns on Pre-1964 Route 65 (later Route 69 and then Route 245) south of Route 180. Somewhat longer in terms of mileage but a hell of a lot faster than a straight shot up Route 65/Route 245.
(Source: Scott Parker on AARoads, "Re: CA 63", 11/9/2019)