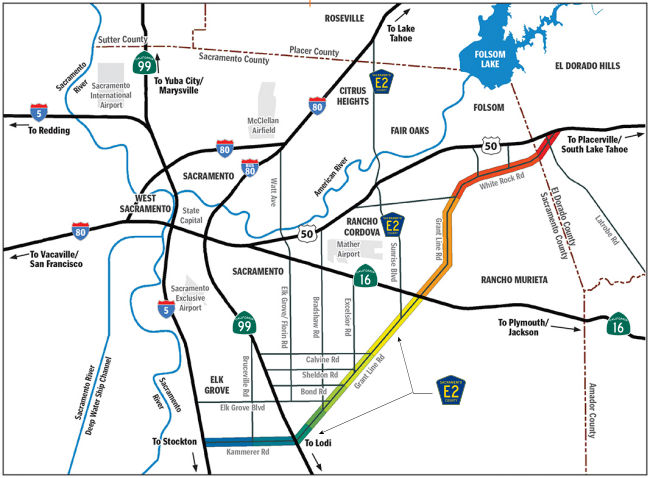 Segment 1 of this route is proposed as part of the Capitol Southeast Connector. In March 2013, it was reported that local governments behind the proposed Capital Southeast Connector on Friday approved a financing plan and design guidelines, moving the massive project a big step forward. The proposed expressway from Elk Grove to El Dorado County is envisioned as a way to ease traffic congestion and boost the region's economy. The 35-mile route is expected to cost $463 million in 2012 dollars through 2035. About $118 million comes from a Sacramento County tax measure approved by voters in 2004. Directors of the joint-powers agency that runs it —representing the counties of Sacramento and El Dorado, as well as the cities of Elk Grove, Folsom and Rancho Cordova — unanimously approved the project's financing and design plans. As early as summer 2013, the local governments could vote to commit funds to the project and empower the agency to take full responsibility. Described as what would be the county’s largest congestion-reducing road in decades, the project would link I-5 and Route 99 just south of Elk Grove, then run along Grant Line and White Rock roads skirting Rancho Cordova and Folsom, finally connecting to US 50 in El Dorado Hills. The expressway would consist of two to three lanes in each direction.
(Source: Sacramento Business Journal, 3/8/2013)

In December 2016, there was an update on the connector. The effort suffered a setback in November 2016 when voters rejected Measure B, the Sacramento County transportation half-cent sales tax that would have provided $125 million for the project – more than a third of the connector’s estimated $335 million construction cost. Despite that, proponents say they intend to get the massive project built. They just aren’t sure when. The planned connector would be a four-lane expressway with a center median and a bike trail, much of it an expansion of Grant Line Road and White Rock roads. It would connect to US 50 at the Silva Valley interchange in El Dorado County at its northeast end, as well as to Route 99 in south Elk Grove and I-5 south of Sacramento at its southwest terminus. The current estimate is that it will take another several decades to get the expressway built. Even then, it will be a smaller road than first imagined. Previously, officials talked of building six lanes in some spots, with interchanges instead of intersections, with an estimated cost at one point of $700 million. Eventually, when expected east county growth causes congestion on the new road, the connector could be turned into a full expressway by turning intersections into interchanges. The group built an initial 2.2-mile section in 2012, expanding and straightening part of White Rock, from Grant Line to Prairie City Road. That section offers a preview of what the entire corridor will look like. Future sections are expected to have a bike trail separated from the roadway. Despite the November ballot box setback, the connector project is far from financially bereft. It is in line to receive $118 million over the next two decades from the county’s existing Measure A transportation sales tax, approved by voters in 2004. The connector group also will collect fees from developers who build housing projects near the connector corridor. The group currently has $15 million it plans to use in 2018 to further widen another 2 miles of White Rock Road to four lanes between Prairie City Road and the northern branch of Scott Road. Planners said they had hoped to build a longer section all the way to Latrobe Road in El Dorado County but do not yet have the extra $24 million that would cost.
(Source: Sacramento Bee, 12/31/2016)

In June 2018, it was reported that the Capital SouthEast Connector Joint Powers Authority was awarded a $20 million grant through SB1 to help further the construction of the 34-mile expressway, which passes through the south of Folsom. The funding was provided by the California Transportation Commission’s (CTC) Local Partnership Program (LPP) available through Senate Bill 1, the Road Repair and Accountability Act of 2017. The funding is a boost to the expressway project, which has widespread benefits throughout and beyond the Sacramento region, including Folsom. The grant will help fund the Connector project which closes a rural-to-suburban connectivity gap by transforming 34 miles of two-lane rural roads into a state-of-the-art, four-lane expressway connecting the communities of the City of Elk Grove, Sacramento County, City of Rancho Cordova, City of Folsom and El Dorado County. The new expressway will provide instant regional congestion relief to downtown Sacramento, all while providing parallel capacity to US 50 as well as an evacuation route for the southeastern part of Sacramento County. Project benefits also extend beyond the region as the Connector has been identified as a key project within California’s Central Valley Major International Trade Region, and will connect three U.S. Department of Transportation’s Primary Freight Network Routes that are the backbone of goods movement within the Central Valley. Earlier in 2018, the Sacramento Transportation Authority ranked the Connector as it’s No. 1 regional transportation project pursuing funding through the CTC’s LPP grant program. This funding award comes at a critical time for the project. The Connector was one of only two California projects, and the only rural project, that applied for federal dollars through the Infrastructure for Rebuilding America (INFRA) grant program that received LPP funding. The $20 million grant by the CTC will increase the capacity to strongly leverage state dollars if federal funding is awarded. With funding through the LPP grant, $40 million in needed roadway improvements in Elk Grove, Folsom and Sacramento County will begin. The Connector JPA was formed in December 2006 and includes Sacramento County, El Dorado County and the cities of Elk Grove, Folsom and Rancho Cordova. It is responsible for the Connector’s planning, environmental review, engineering design, development and construction.
(Source: Folsom Telegraph, 6/6/2018)

In October 2018, the CTC took the following actions in conjunction with the Capital SouthEast Connector: