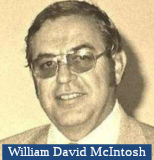 County Sign Route A1 was proclaimed the William D. McIntosh Highway in 2000. It was named after William McIntosh, the county's first director of public works. Walnut Creek Resident William David McIntosh died peacefully surrounded by loved ones on August 11, 2010. "Bill" was born to William and Maud McIntosh in Portola, CA, March 24, 1924. He joined the U.S. Navy stationed on the USS St. Paul, serving during both WWII and Korea. At the end of WWII he married Dorothy "Dixie" Morgan from Scranton, PA, settled in Susanville and raised two daughters. Bill began his career with the Lassen County Road Department on the survey crew in 1946. He retired in 1987 as the Director of Public Works. During his distinguished 41-year career, he brought unique vision to local, state and national public works. He headed development of the County Route Marker Program adopted nationally in 1967. Lassen County received the first number, "A1", for the Eagle Lake Road. In 2000, County Sign Route A1 was officially proclaimed the "William D. McIntosh Highway." Bill rose through the ranks of the County Engineers Association of California (CEAC) and the National Association of County Engineers (NACE). Among his many honors, CEAC created the "William D. McIntosh Lifetime Achievement Award" and NACE named him "Rural County Engineer of the Year". Bill created the CLODS California's Loyal Order of Dedicated Servants (CLODS) and the NFL (NACE's Former Leaders). In 2002, Bill and Dixie moved to the Bay Area. His beloved Dixie passed away in 2004. Bill's last residence was in Rossmoor, CA where he built more friendships and enjoyed music, movies, sports and theater with his dear friend Betty. He was an avid fan of the SF Giants and 49ers.
(Source: Portola Reporter Archives, 9/20/12, see "My Turn" column; Legacy.Com; Be A Producer blog, article posted 8/31/2009; Image source: CSEA Presidents)

Eagle Lake Road was renamed Route of the Olympic Torch after it was the only county road selected for the 1984 Olympic Torch relay.