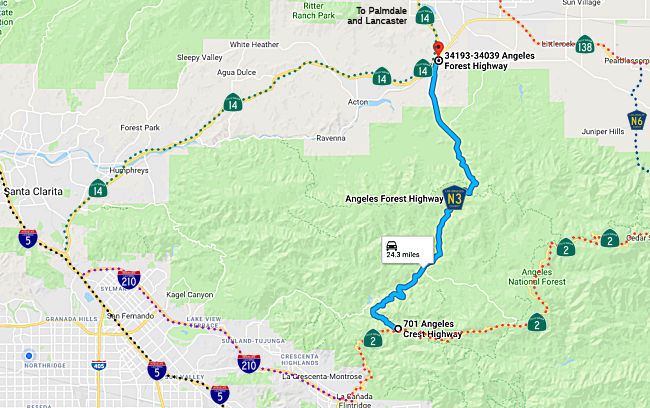 Note: There is no signage along this route to indicate it is County Sign Route N3, except for the occasional call-box showing N3. It is, however, well maintained with county postmiles and beautiful views.

In November 2010, it was reported that the LA County Board of Supervisors dedicated a section of the Angeles Forest Highway in honor of the two Los Angeles County firefighters who lost their lives on duty battling the Station Fire ("Captain Ted Hall and Engineer Arnie Quinones Memorial Highway"). Captain Ted Hall and Engineer Arnie Quinones died on August 30th, 2009 when their truck plunged 800 feet off the side of a road near Mount Gleason. Less than a month later, Quinones' widow, Lori, gave birth to the couple's first child, a daughter. Hall and Quinones were honored with a large public memorial held at Dodger Stadium, while the Station Fire--the largest in LA County history--continued to burn. Signs have been affixed at both the northbound and southbound (one-quarter mile south of Sierra Highway) entrances to the highway.