In 1947, in response to the recommendations of the Joint Interim Commission on Highways, Roads, Streets, and Bridges, the Legislature passed the Collier-Burns Act (Chapter 11). This act:

The Division of Highways was reorganized to deal with the greater volume of work the act generated.

In 1953, the gasoline tax was increased from 4.5 to 6 cents per gallon. At the same time, the other highway users taxes were increased by a third.

1956 saw the passage of the 1956 Federal Aid Highway Act, which created the 40,000 mi National System of Interstate and Defense Highways. The funding level for this undertaking was established at $25,000,000,000 over a thirteen year period, with increased funding for primary and secondary highways. The primary source was a 3¢ per gallon federal gasoline tax. Funds from this tax, along with funds from other federal highway user fees, were deposted into a "Highway Trust Fund". The federal share of Interstate construction costs was set at 90%, compared to the previous 50% rate.

In 1957, the Division of Highways submitted a plan for a statewide freeway and expressway system to include city streets and county roads. In proposed the construction of 12,241 mi of controlled access highways serving every city with a population greater than 5,000. It would carry over half of the state's motor vehicle traffic. The state established for following criteria for route selection: 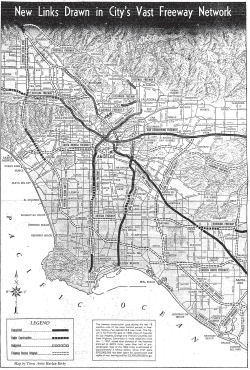 In 1959, the Legislature approved the 1957 Highway Commission plan. It also made the 1953 gasoline tax increases permanent. Chapter 1062 was also passed, establishing the Freeway and Expressway system and defining a number of routes. However, Chapter 1062 noted:

The Winter Olympics in Squaw Valley served as impetus to build I-80. I-80 became the first all-weather, trans-Sierra Nevada highway and was nationally recognized as a major engineering achievement.

California established the Highway Transportation Agency that consisted of the Department of Public Works (which included the Division of Highways), Department of Motor Vehicles, and the California Highway Patrol.