The first roads in California were horse trails and wagon roads, developed by people coming to California. After statehood was granted in 1850, Californians began to pressure for improved roads. As a result, in 1850, the state created the Office of Surveyor General, with the duty to suggest roads. In 1855, there was public demand for a road from the Sacramento Valley to Carson Valley in Nevada, and the legislature passed a bill ordering the Surveyor General to survey a good wagon road over the Sierra Nevada Mountains, and authorized bids for construction of the Emigrant Wagon Road (one record actually shows this bill passing in April 1850). The bill authorized costs up to $105,000, but the legislature neglected to actually appropriate the funds. Instead, a policy of granting franchises for building toll roads evolved, resulting in a number of toll roads and bridges being constructed between 1850 and 1880. One of this was the authorized "Emigrant Wagon Road", also called the "Lake Tahoe Wagon Road", which was completed in November 1858. In 1864, the railroads (CP) completed the Dutch Flat and Donner Lake Wagon Road over the Sierra. This was also a toll facility. 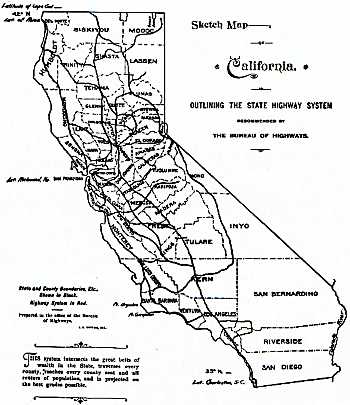 In 1895, the Bureau of Highways was created by the State Legislature with the appointment of the Lake Tahoe Wagon Road Commissioner and the Bureau of Highways Commissioners. Three newly appointed officials, Marsden Manson of San Francisco, R. C. Irvine of Sacramento, and J. L. Maude of Riverside, purchased a buckboard and visited each county in 1895-1897 to form recommendations for a state highway system. Their first report indicated that "The conditions of highways in California today is the result of generations of neglect and apathy" (sound familiar?). The commission inventoried the existing road system, logging in excess of 16,500 miles. When they completed their survey, they issued a report to the Governor. This report, submitted November 25, 1896, recommended a system of state highways made up of 28 distinct routes, of approximately 4,500 miles, using existing roads when possible, connecting all county seats. This is illustrated in the map to the right (click on the map for a larger image)

The original proposal argued that the state should construct the routes, as the counties were too cash-strapped to construct and maintain the roads on their own. However, this was modified by the legislature, which feared the increasing power of the state capitol. They inserted provisions that permitted the counties greater control over the system, including the ability to add an unlimited amount of new routes.

Note: The actual LRNs were assigned after the 1916 bond act, and were codified in 1935

In 1897, the Legislature dissolved the Bureau of Highways, and established the Department of Highways, consisting of three commissioners appointed for two year terms, and a civil engineer appointed for a four year term. It was at this time that the state took over the toll road, then known as the Lake Tahoe Toll Road. This is the route of present-day US 50. However, the recommendations made by the new Department were often ignored, because of the fear of central state power by the legislators.

Note that this may also have affected LRN 23.

In 1902, the state constitution was amended to give the Legislature the power to establish a system of state highways, and to pass the laws necessary for highway construction. It also permitted state aid to be provided to counties for road construction.

The following routing was authorized for surveying in the 1903 statutes (PDF, 45 MB):

The following routing was defined in the 1905 statutes (PDF, 68.5 MB). The Chapter also repealed an 1895 highway definition, using its funding for this route:

In 1907, the Legislature created the Department of Engineering, the forerunner of the Department of Public Works. The Department of Highways and Lake Tahoe Wagon Road Commission were placed under the control of the department. Highway funding was provided by the Legislature through "Special Appropriations". This was at a minimum funding level, and most funds were devoted to maintenance, such as clearing storm debris and the construction of retaining walls and culverts.

The following routes were defined in the 1907 statutes (PDF, 77 MB)

The following highways were defined in the 1909 statutes (PDF, 63 MB):

In 1909, the Legislature authorized the first State Highway Bond Act, for $18,000,000 (approved by the voters in 1910). This act established a State Highway system and authorized construction of 3,052 mi of highways.It required that the Department of Engineering acquire the necessary land, and construct a continuous and connected highway system. The funding allowed a significant quantity of highways to start construction. For example, with funds from the State Highway Bond Act of 1909, construction began on California State Highway Contract No. 1: paving a segment of El Camino Real in Burlingame and South San Francisco, San Mateo County. The highway was eventually designated US 101.

Note: The definitions of the bond routes can be found here.


Scott Parker at AAroads noted the following about the early LRN assignments:

It was clear that the lowest numbers -- the first to be defined -- connected specific cities, places, or points of interest deemed to be of statewide importance -- LRN 1 and LRN 2 essentially defined US 101 (with some local deviations such as the northernmost segment of LRN 1 along US 199 rather than US 101) from the Mexican border to Oregon, and LRN 3 and LRN 4 covering US 99 (and US 99E) from Oregon south to Los Angeles. The next batch of numbers were connectors from these north-south "spines" to other points, sometimes in two directions; LRN 5 - LRN 8 were scattered over Northern California, connecting to one or more of the "spines". LRN 9 was more or less a rather strange "branch" from LRN 2 in Ventura, extending east along the northern reaches of the Los Angeles basin to San Bernardino, while LRN 10 crossed east-west on what is now Route 198. LRN 11 extended two ways from Sacramento (SW and east along US 50), LRN 12 connected LRN 2 in San Diego with Imperial Valley via US 80, LRN 13 connected LRN 4 at Salida, north of Modesto, with the eastern Sierra slope (on what is now Route 219 and Route 108). LRN 14 was a Bay Area connector from Oakland to Martinez (at the time, the US 40 Carquinez Bridge was privately owned and not part of the LRN network, so US 40 was discontinuous: LRN 14 south of the bridge and LRN 7 northward). LRN 15 connected LRN 1 and LRN 3 via Route 20, while LRN 16 was Route 175 from Hopland to Kelseyville, on Clear Lake (this must have been politically-motivated, as it partially duplicates LRN 15, only 20 miles to the north). LRN 17 connected LRN 3 at Roseville to Grass Valley, while LRN 18 was the "all-weather" Yosemite connection (Route 140) from LRN 4 at Merced. LRN 19 connected LRN 2 at Fullerton to the "Inland Empire" cities of Pomona and Riverside, while LRN 20 was a cross-state connector, originally Route 44 for its full length but later US 299 (Route 299) west of Redding. LRN 21 and above didn't follow the pattern of the first twenty as "branches" extending out from the spines, but were established in order statewide as roads were brought into the state system.
(Source: Sparker at AAroads, 9/6/2016)

In 1911, the Legislature passed the Chandler Act, which authorized the appointment of a three member board to advise the Department of Engineering. This board was to become the first Highway Commission. It also created the position of State Highway Engineer, serving at the pleasure of the Governor. The first State Highway Engineer was Austin B. Fletcher. Mr. Fletcher and the highway commissioners took a 6,800 mi tour of the state highways in 1911, and as a result of the recommendations from that tour, adopted the state highway system. Mr. Fletcher also recommended dividing the state into seven divisions (now "districts"), each in charge of an experience engineer. The Highway Commission also recommended that road be "permanent in character" and provide a "continuous and connected state highway system".

On August 7, 1912, Commission Chairman Burton Towne turned the first shovel of dirt on State Highway Contract No. 1, for a section of the coast route between South San Francisco and Burlingame. However, this was not the first ground breaking for a new state highway, which had occurred a month earlier 3 mi N of Wheatland for what would become US 99E.

In 1914, the function of Maintenance was added to the Division of Engineering, supported by funds made available by a 1913 legislative act requiring motor vehicle registration. Revenue generated by these fees were to be divided between the states and counties, making it possible to develop a systematic maintenance program.