The U.S. Bicycle Route System (USBRS) is a developing national network of bicycle routes connecting urban and rural communities via signed roads and trails. Created with public input, U.S. Bicycle Routes direct bicyclists to a preferred route through a city, county, or state. As of 2020, over 14,000 miles are currently established in 29 states and Washington DC – and many routes are signed.

In California, routes are designed through the following process:

To donate and help build the USBRS, click here. 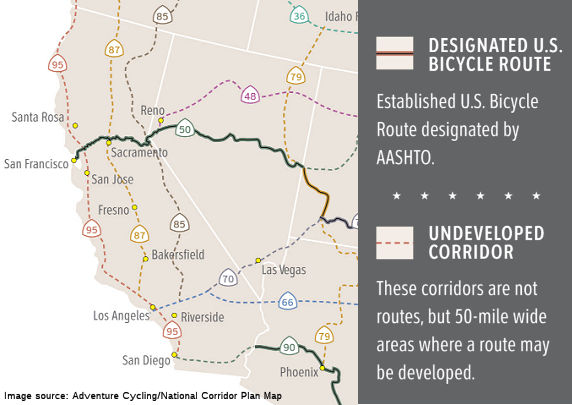 The majority of USBRs have been designated since 2011, and the focus in the last five years has been on designating routes rather than promoting them. As expected, there are more plans and intentions to sign, map, and promote the USBRS than are examples where it has already been done. The National Corridor Plan may be found here; the image shows the plan for California:
(Image source: Adventure Cycling/National Corridor Map)

The National Corridor Plan is the blueprint for U.S. Bicycle Route development, and shows what the 50,000-mile network will look like when complete. Corridors that have been developed into routes and officially designated as U.S. Bicycle Routes are shown with dark solid lines. Undeveloped corridors are shown with light dotted lines, and are generally only concepts until a route is researched and designated. Corridors can be added or changed depending on the opportunities and interests of a given state. To date, 14,598 miles of U.S. Bicycle Routes have been established in 29 states: Alaska, Arizona, California, Connecticut, Florida, Georgia, Kentucky, Idaho, Illinois, Indiana, Kansas, Maine, Maryland, Massachusetts, Michigan, Minnesota, Missouri, Nevada, New Hampshire, North Carolina, Ohio, Pennsylvania, Tennessee, Utah, Vermont, Virginia, Washington, West Virginia, Wisconsin, and the District of Columbia. The Adventure Cycling page on the NCP provides a downloadable map.
(Source: Adventure Cycling/National Corridor Plan)

The following are Concept Routes (without maps):