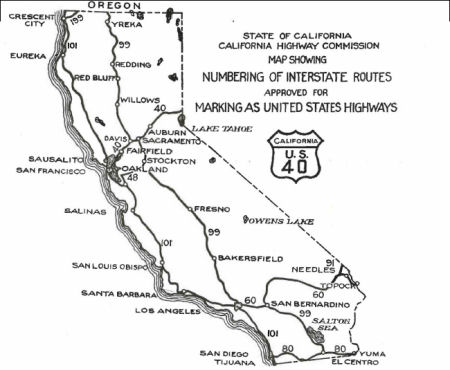 The Federal Highway System (i.e., "US" highway routes) was initially proposed at the annual meeting of the American Association of State Highway Officials in November 1924 to coordinating the naming and marking of interstate highways. They prepared a resolution requesting the Secretary of Agriculture to select a system of highways, and appointed a board to perform a study and make recommendations in March 1925. Initial routes were selected from the Federal Aid Road System, and it was decided that routes be marked by means of a standard highway marking sign. The numbering system for these highways was adopted in August, 1925. The basic goal was to have the US Highway milage be no more than 3% of the total certified rural miles in the state. California's eventual milage was 2,220 miles, or 3.1%. The sign used for the Federal Highway System was adopted in 1926, and was rectangular in shape.

A letter from Mr. Edwin W. James, as preserved at the FHWA, provides some good insight into the early days of this system. It it, he notes:

I was secretary of the Board and most of the details passed through my hands at one time or another. At one of the first meetings the general question presented above was thrown into my lap. I knew it must come sooner or later and had given it considerable thought. You will quickly see on scanning the report the conditions we faced in the particular task laid before us. There were two conditions that must be met. (1) The scores of named routes, roads and trails must be eliminated. Such a method of designating so large a system of roads on a fairly established pattern was not feasible. It was too cumbersome, it had a bad background of unintelligent but kindly, serious and friendly efforts by hundreds, maybe thousands of good road advocates and effective road boosters. In opposing such a group we were pushing aside some of the biggest and best support we had for the big road plan. The good would have to go with the bad. Organizations like the Lincoln Highway, the Dixie Highway, the Old Spanish Trail Associations which were sound agencies could not be reserved while three or four score "skip-by-night" agencies were to be ignored and washed out. (2) The second puzzle in the task at hand was to devise a scheme that would take up all the named routes we wished to save, in whole or in part; be flexible enough to permit expansion over a long period, and above all fit the United States as an area without an established road system of old, and now about to create one on a magnificent plan.

When this task was put into my lap, I was instructed to confer with A. B. Fletcher, then of California, who apparently had some good ideas for the job in hand. This "Committee of Two" did not last long. Mr. Fletcher asked me to his office at once and showed me his big idea. It would be the longest single road in the world. It could be numbered No. 1 and was laid out on a U.S. map he had on his desk, from a point, Seattle or Portland, away up in the north west to Key West below the tip of Florida. It would be the greatest road in the world! As I listened and looked, I first wondered where No. 2 road would be laid, and where Nos. 5, 10, 50 and 100? A road map of such a system would be a map of chaos, not of roads. I saw at once that Mr. Fletcher and I were not thinking along the same lines, and I saw that I had better go it alone.

By that time I had my idea of the second task under control, and with Fletcher of little help I saw that I must show my hand at once, and have so good a solution that it would carry me past the first task of shoving the trail organizations aside.

So I went ahead on that basis. As you know, the U.S. is about twice as wide as it is from North to South, and with this I saw a complete pattern of just what I wished. It stares one in the face, it is so simple and so adjustable. With north-south roads numbered odd from east to west, and east-west roads numbering even from north to south, you at once start a simple, systematic, complete, expansible pattern for a long time development. Numbered on the 10's; 10, 20, 30, etc., to 90 would provide nine principal east-west routes.

Note: The US Highway sytem is a different critter than Interstates. Interstates have special funding, US Highways are funded from the same pot as state highways. In fact, a US highway is just a state highway with a fancy shield and a number that matches the national grid. US highways are meant for navigation only, as opposed to the 'quality' function of Interstate routes. With the US designation comes a certain amount of voluntary oversight from AASHTO. [Information courtesy of R.V.Droz]

The numbering conventions for the US Highways is as follows:

The numbers assigned to principle east/west routes end in 0; for north/south routes, they end in 1. Other increments of the low-order digit fill in the grid. Where necessary, a high-order digit is added to provide additional spur routes.

Divided routes are supported, and have a character appended (for example, US99E and US99W. There are also special purpose routes: Business, Bypass (Byp), Alternate (Alt or A), Temporary, and Toll. At one time, there were designations such as "City".

AASHTO now requires that routes that exist solely in one state under 300 miles be eliminated as US highway routes.